Plus One English Exam Preparation: HIS FIRST FLIGHT by Liam O’Flaherty

The seagull was afraid to fly because below him was the vast sea and he thought his wings would never support him and he would fall into the sea and die.

They came around calling to him in a loud voice, scolding him, threatening to let him starve on his ledge unless he flew away.

3. How did the parents support and encourage the young seagull’s brothers and sister?

They flew about with them, trying to perfect them in the art of flight. They taught them how to skim the waves and how to dive for fish. When his older brother caught his first herring and devoured it, his parents circled around raising a proud cackle.

4. Cite an instance which shows the pathetic condition of the young bird.

When the sun was shining hot, the young bird felt the heat all the more because he had not eaten anything since yesterday night. He searched everywhere but not a scrap of food was found. He even gnawed at the dried pieces of eggshell, from which he and his brothers and sister were hatched. It was like eating a part of himself.

5. How did the bird try to reach its parents without having to fly?

He trotted back and forth from one end of the ledge to the other, trying to find some means of reaching his parents without flying. But on each side of him, the ledge ended in a sheer fall of a precipice with the sea beneath.

6. Why could the seagull not succeed in its attempt?

The seagull could not succeed in its attempt because there was nothing to walk on that would take him to his parents. A deep, wide crack separated him from his parents, and there was no way for him to reach them except by flying to them.

7.Do you think that the young seagull’s parents were cruel?

No, the parents of the seagull were not cruel. They were wise in trying to teach him the importance of self-reliance.

8. Can you justify the attitude of the parents?

The parents were right in their actions. They intended to teach him the importance of confidence and self-reliance. One can’t depend on his parents all his life for his livelihood. He should learn to find food for himself once he reaches a certain stage of his life.

9. Your parents sometimes behave in the same manner. They may seem cruel and unrelenting. Does it mean that they do not love you?

Our parents sometimes behave in such a cruel and unrelenting manner to make us self-reliant. This does not mean they do not love us. It only means they love us and that is why they train us to be independent and self-reliant. If they treat us as a helpless baby all the time, we will remain helpless. So it is their love that forces them to be seemingly cruel and unrelenting at times.

10. What prompted the young seagull to fly finally?

The seagull was prompted to fly finally by his hunger. He was starving, and the mother would not give him the fish she had brought with her. His mother wanted him to fly to her to get it.

11. Why was the young bird terrified? How did it overcome its fear?

When the mother of the young bird brought fish, she didn’t let him eat the fish until he was ready to fly. The seagull dived at the fish, maddened by hunger. He fell outwards and downwards into space. His mother had swooped upwards. As he passed beneath her, he heard the swish of her wings. Then a monstrous terror seized him, and his heart stood still. But fear only lasted a moment. The wind rushed against his breast feathers, then under his stomach and against his wings. He could feel the tips of his wings cutting through the air. He realized that he was no longer falling now. He was flying gradually, downwards and outwards. Therefore, he was no longer afraid.

12. How did the family support the seagull?

13. Why couldn’t the young seagull stand on the green sea?

The young seagull could not stand on the green sea because the legs would go down the water. But when his belly touched the water, he did not sink further.

14. Do you think that the bird’s parents loved him? Why?

Yes, the bird’s parents loved him. They wanted to teach him how to be courageous and self-confident. The mother even came with a piece of fish to tempt him to attempt the flight. And when finally he flew, all the family members showed their joy by flying with him and making happy noises. 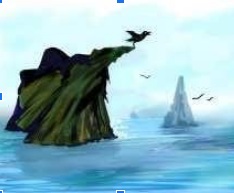 Dear students, in each lesson you have several new words to study. I would like to share the new words and their meaning from the first lesson in the next post.

Lucky Club - Online Casino Website - Luckyclub
Welcome to Lucky Club and try to win real money by spinning and winning the jackpot, you have come to the right place! Lucky Club offers luckyclub a variety of exciting