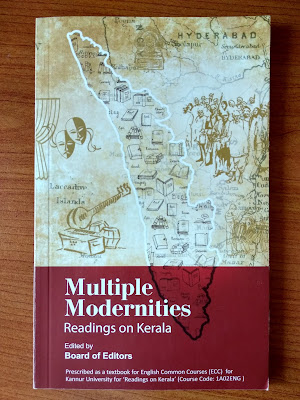 This section is dedicated to the Under Graduate students of Kannur University. The discussion topic here is the common course text for I BA/B Com/BSc/BCA courses. The syllabus is newly installed and therefore faces a dire shortage of materials from which students could make notes to prepare for exams. These materials are shared here in the sincere hope that students would be able to make use of the materials while preparing for their semester examination.

1. What are Guru’s instructions regarding the code of conduct for the pilgrims?

Vallabhassery Govindan Vaidyar and T K Kittan Writer visit Sree Narayana Guru on 19 January 1928. The purpose of their visit was to request Guru to declare Sivagiri as a holy place. Vaidyar and Writer suggested that once the place is declared holy people from the Ezhava community and other downtrodden communities may visit Sivagiri once in every year. The idea was to establish a new pilgrimage centre that permitted people who faced discrimination from the upper caste Hindu society to worship and come together without any restrictions. Guru argues about the relevance of yet another holy place when the nearby Varkala Janardhanam is already a place of significance. However, the followers of Guru convinced him of the relevance of the new pilgrim site. Later, Sree Narayana Guru instructs his followers regarding the code of conduct for the pilgrims. It was Kittan Writer who engaged Guru in a discussion about the methods to be adopted while making the pilgrimage. Guru suggests that people, today, are not inclined to follow long periods of abstinence and are reluctant to take austere measures to perform a pilgrimage. He suggests that observing ten days of abstinence along with Sree Buddha’s five Ideals of Purity would be enough. Upon asking, Guru also suggests yellow garments as the dress code for Sivagiri pilgrimage. He instructs his disciples not to be extravagant during the pilgrimage. Guru even points out that the yellow garment prescribed for the pilgrimage should not be made up of silk or expensive clothing. Instead, the casual white dress can be used after colouring it with turmeric. This way, a pilgrim can reuse their yellow garments. Thus, Sree Narayana Guru prescribes a relevant set of codes for every pilgrim who makes the yearly pilgrimage to Sivagiri.

2. What are Guru’s strictures regarding the need to maintain thrift and discipline during the pilgrimage to Sivagiri?

Sree Narayana Guru (1855-1928), philosopher, poet, and social reformer was approached by Vallabhassery Govindan Vaidyar and T K Kittan Writer on 19 January 1928 requesting him to establish Sivagiri as a holy place for pilgrimage. Guru listened to their request and by asking various questions, tried to test their willingness to keep the dignity of the pilgrimage. Once he discovers that his disciples have no further questions regarding the complexity of conducting the pilgrimage, he takes on the role of a reformer. Guru elaborates on the necessity of keeping the pilgrimage free of extravagances and noisy celebrations. He suggests that the dress code for the pilgrimage to Sivagiri shall be the yellow dress worn by Krishna and Buddha. These need not silk garments. According to Guru, a casual white dress can be used after colouring it with turmeric. It can be laundered and used even after the journey, the teacher points out. He suggests that the journey should be marked by humility and lack of luxuries. Hymns can be chanted with piety. Noises, revelry, and extravagances will debase the whole enterprise. Sree Narayana Guru stresses that the pilgrims to Sivagiri should not waste a single penny. He goes on to calculate the expense for a pilgrim travelling from Kottayam to Sivagiri and back. It’s only three rupees. Guru’s intervention in the conduct of the pilgrimage is focused on the reformation of the Ezhava community. Guru suggests that the Ezhava community incur debts by spending more than they earn. This is not a healthy practice. This habit should be changed. Guru’s proposition brings home the important message of practising a disciplined life. Such a practice should begin with the pilgrimage to Sivagiri.

3. “Every deed should have a purpose.” Explain.

Sree Narayana Guru asks his followers what the purposes of the pilgrimage to Sivagiri are. Kittan Writer is quick to answer that they have already heard Guru spell out the objectives. However, Guru objects to Kittan Writer’s statement by asserting that what he had already mentioned are just methods adopted for the pilgrimage. Objectives of a journey are different from methods adopted to complete the journey. Guru seeks the answer to his question from his disciples. However, none of them can give any response. Guru declares that by simply wearing a yellow garment and travelling for days and incurring a major financial expense nothing could be achieved if there is no purpose for the journey. It is in this context that Guru makes the remark: “Every deed should have a purpose.” He instructs his disciples to note down the aims of the pilgrimage. According to Guru, the aims of the pilgrimage are 1. Education 2. Cleanliness 3. Piety 4. Organization 5. Cultivation 6. Trade 7. Handicrafts 8. Technological Training. He recommends that people should listen to it with utmost discipline. The aims of the pilgrimage should be put to practice by the pilgrims. Guru’s vision of prosperity stems from a disciplined and purposeful life. According to Guru, prosperity must not be limited to the Ezhava community. Prosperity should span the entire society and include all human beings. He suggests that the Ezhava community should be role models to others and this should be the main purpose of the pilgrimage to Sivagiri.
4. What are the salient features of the conversation between Guru and the visitors?
In this conversation, Guru elaborates on the many fundamental notions regarding the establishment of the pilgrimage to Sivagiri. The suggestions regarding the methods and aims he dictated for the conduct of the pilgrimage form the crux of Guru’s teachings. The conversation spans four major ideas. The first one is the relevance of establishing Sivagiri as a holy place. Guru defers the announcement of Sivagiri as a holy place by suggesting the presence of other similar sites in nearby locations. However, his disciples can convince him that places of worship kept by upper-caste Hindus are unapproachable by the downtrodden people who face dishonour, financial loss, and physical torture from the upper caste people. Guru admirably attempts to help his disciples imbibe the total meaning of a pilgrimage. The date proposed by Guru for the pilgrimage is 1 January of every year, which falls on the 16th or 17th of the month of Dhanu in Malayalam calendar. The second feature of the conversation is the methods to be followed while performing the pilgrimage. Guru decrees ten days of abstinence along with Buddha’s five Ideals of Purity such as Purity of Body, Purity of Food, Purity of Mind, Purity of Word, and Purity of Deed. Guru proposes yellow garments as the dress code for pilgrims to Sivagiri. Guru substantiates this decree by pointing out that yellow was the colour of garments preferred by Krishna and Buddha. He also suggests that there is no requirement to wear rudraksha on the pilgrimage. Consumption of a paste of rudraksha is preferred to wearing rudraksha. Thirdly, Guru decrees discipline and thrift during the pilgrimage. He specifies that any white garment immersed in turmeric could be used as the dress for the pilgrimage. Also, the expense of the pilgrimage should be the sum of the bare minimum rupees required to reach Sivagiri from the source of the journey. By never incurring debts and keeping one’s mind disciplined by chanting hymns with piety one can overcome the hurdles due to the marginalization of the community. Lastly, Guru delineates eight objectives of the pilgrimage such as education, cleanliness, piety, organization, cultivation, trade, handicrafts, and technological training. Guru pronounces the need to modernize one’s thoughts and deeds in connection with everyday life experiences. The paradigm shift that he has brought to the concept of spirituality from being an abstract notion to the performance of healthy practices is indeed a novel idea and of relevance to contemporary society.

A great attempt that will really be useful to the students.

Was really good for the students.

It was really nice and useful. Thank you sir