I didn’t have the slightest idea what this conductor would deliver such an awful news at this time. I was returning home after a long day of class. The conductor said; “We will drop you at the old bus stand.”

“You always go to old bus stand?” I enquired. I was thinking about a plan. Never, never to take this bus again. I had to go to the new bus stand. Now, from the old bus stand, I would have to walk about 1.5 kilometers or take an auto rickshaw and pay Rs: 20. Thankfully, I had enough money with me today.

“No, it is because there is a traffic block, and we get very late if we turn around the new bus stand. So we choose to go the old one.” The conductor explained, smiling with an affable face. It was not just about the money, I thought, but also about the time that I’d lose in reaching the new bus stand? I had work to do at home. The book, the blog, and the reading I had to do…

Suddenly, like the gush of a fresh wind, a thought came to my mind. As I have always argued to my friends, family and readers, thoughts exist beyond human mind. When the mind is tuned to a certain frequency, the thoughts that exist in that frequency is received inside. I thought about going to the public library. I had planned it the previous day, but had forgotten about it. This thought seemed a sign, but for who? I know not.

What happened the previous day too, is nothing short of a magical moment. I was at home, in the evening, trying to relax by listening to some videos. Meanwhile, a Youtube video by Dr. Wayne W. Dyer came up from the jumbled mess of Bollywood songs my sister had watched previously. The Youtube has this problem of giving suggestions each time one opens a fresh page, based on the previous page views. In this aspect, Google seems to be the father of suggestive mannerism.

In the lecture, Dr. Dyer was talking about ‘intentions’. He was not talking about the limited idea of intention, but about the divine, overpowering ‘intent’, from which every living being has emanated. In order to explain his point, he quoted from a book by Carlos Castaneda.

Carlos Castaneda is one of those writers who intrigue me ceaselessly. If you remember, I wrote an article on returning one of Castaneda’s books to the public library and the auto rickshaw ride, the previous month. This article was titled “The Wretched Riders”. Two other articles preceded this one, titled “The Fire from Within” and “The Nostradamus Redemption”, which included my encounter with this particular book by Carlos Castaneda. However, I could not read the book completely and was forced to return it as I had already crossed the library due date.

So, where were we?

Dr. Dyer, was talking about ‘intent’. “In the universe, there is an immeasurable, indescribable force, which those who live of the source call intention.” Dr. Dyer said that he had quoted from Carlos Castaneda’s book, The Fire from Within.

I had returned this same book to the library, the previous month, without finishing it. The strangest coincidence was that the chapter where I left off the book was titled, “Stalking, Intent, and the Dreaming position.” 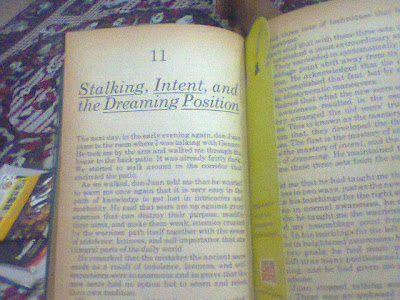 Once I got off the bus at the old bus stand, I walked straight to the library, which was located nearby. Inside the library, I did not even remove my shoes, which was mandatory. I ran towards the back of the shelves, the place from where I first discovered The Fire from Within. As I was searching through the shelf full of books, another thought flickered in my mind. Impossible! I mused at the proximity of this strange behavior from part. Not even once did I consider the possibility of someone else taking the book before me, while deciding to come here and look for it. ‘What if I could not find The Fire from Within here, today?’

I will satisfy myself by taking another book for the sake of it, I settled down my anxiety. Right then, I found it. The Fire from Within. That which is tangled and linked beyond our consciousness is what I feel evident in the experience I had. I would not though, call if ‘fantastic’ or ‘miraculous’, because by doing so, I would be judging the experience and belittling the signs that are engraved in it for the understanding of us.
- August 14, 2013