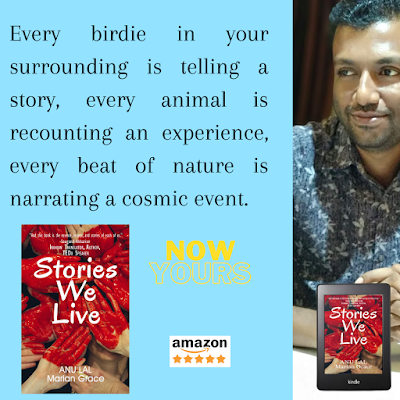 For the first time, for my tenth book, I broke my convention. My convention was to release the book in quiet solitude. No one probably realizes that a new book has been released into the vast sea of other books, into a battle for attention by authors, reviewers, and publishers.

Most numbers of suggestions were received on Instagram. The names that I would like to acknowledge here are, author Devika, my buddy Divyank, author Krithika Sharma, Deepti Gupta, Ashwini Iyer, author Kapil Raj, and others.

I would like to thank all of them who helped me release my book Stories We Live on 14 January 2021.

A special thanks are due to renowned Iranian translator, author Sougand Akbarian, author of SouganDilli, for sharing an invaluable remark on, Stories We Live. When I requested her for an endorsement, she had readily agreed, according to which I sent her a copy of the manuscript. After reading the manuscript, she shared a beautiful quote on the book, which itself reads like poetry. Her quote made my book shine even brighter.

I have a humble request to make to all my readers. Without support from a home crowd, it becomes very difficult to play and win any game played amid greatly stressful circumstances. I have realized recently that my people, the people of Kerala have been showing very less support towards my books. The reason why they do it is perhaps that I write in the English language. Perhaps, they think I am arrogant and that is why I write in English. This is not true. The choice of language is primarily to secure a larger reach and to cater to a wider audience. My selection of language is English because of another reason too, and that is, my mother tongue, Malayalam and the knowledge about its literary expressions are very limited. Even though I studied in a Malayalam medium school, the vernacular Malayalam was the only version of the language I was well versed in. But writing in vernacular Malayalam didn’t help me get published. The mainstream Malayalam weeklies, offbeat weeklies, and newspapers, back in the nineties and early twenty-first century, promoted literary Malayalam with its high-sounding words and expressions, the almost brahminical twist to the language that I grew up with.

Like many of my generation, this brahminical casteism in the literary use of Malayalam distanced me from writing in the language. It sounded artificial, phoney, and unbearable.

Shunned by the people of Kerala, even when I wrote a book on the worst disaster the state had ever faced, the megafloods of 2018, titled Life After the Floods, I could only wish no other writer would have to deal with a similar situation.  Life After the Floods primarily focused on the psychological impacts the floods would have had on the population affected by it. The book also suggests many steps be followed by anyone who reaches a flood-affected area to help the affected people.

You’d say that my release strategy, that I mentioned in the beginning, the silent type, was faulty. No one might have heard about the book. This could be true, had I not invested a considerable amount of money on the marketing of the book, especially on Instagram, Facebook, and on Amazon itself.

Kannur, the district where I am from, is always slow to respond to literary matters. This is my request to the people of Kannur and that of Kerala. For any author to survive, there should be a considerable number of book sales. Without this, flamboyant praises, and literary gatherings wouldn’t help. Literature in Indian English has potential, especially when it is written from Kerala, the south of India. The mainstream of this category belongs to the north of India. I urge both the readers of the north and the south to purchase copies and support this endeavour. This is the only way I could bring more stories to you. My books are always priced below Rs 200. This makes them affordable for common people. Reading an English book would give a good vocabulary for kids, ideas, and stories for the readers, and certainly teach a lesson or two about life.

We spend more than Rs 200 on many unnecessary items, often even daily, including, lotteries, liquor, or cigars. A book is an asset. It will increase your value, even if it is kept neatly in your showcase. Once in a month, why don’t you spend at least Rs 200 on buying a book for you or your beloved ones? Not all authors need to sell lakhs of copies of their books. Just a thousand books sold over one month would help make a decent living.

Let me wind up this write-up here. Please consider my request and act on it. It would be appreciated.