Between the Most Memorable Events and the Unforgettable Moments, which needs an assistance to survive the flow of time? I think Both. The Unforgettable Moments do not require any conscious effort to be remembered, and can survive in one of the most complicated lobs inside the brain. In fact, the way they hide themselves from the wear and tear of the earth-life, and their sudden leap into our complacent moments when we expect them the least, is what makes them special.

The Most Memorable Events, although carry the superlative adjective with them, are obliged to some conscious efforts for their existence in the epic space of the past. We need to copy them—capturing them in motion pictures, as if putting a wild tiger in a cage. The motion pictures or videos are effective in capturing the special moments. But what about those faces intruding eternally into our Most Memorable Events; those people especially in a college video or in a video taken in some public gathering, who we least want in our memory? They would growl at us and would jeer at our present like a monkey, and call names in loud voices, and show signs celebrating their successful presence, tricking us. They conquer our present, paralyzing us in our bed, couch or chair! They are better captured as photographs since they won't move and shout. But with their smile, their signs, they would exist eternally like a dead snake in the paraffin jar in a zoology lab. They too paralyze us.
The best way to preserve the Most Memorable Events is to write them down. Diary writing, though an antique custom today, would act the better part in remembering those Most Memorable Events. Though, when the words were written down they seem to capture each bit and pulse of those events experienced, the reality and the emotions, the words in a diary cannot re-present those events as they were lived. This is the grace with diaries, they won't show us what we do not want to see, for we are weak to control it. We fail to read what we thought we had registered back in time. We feel shameful for our language, and feel weak. But, our weakness saves us. We can skip whatever occurred undesirable or what we never again want to remember, during a Most Memorable Event. And when we read those words back, in your future, the words will bring back the emotions we experienced at that precise moment of writing and not the whole of the chaos around the Most Memorable Event.
- April 30, 2010 No comments:

I am going to tell you a story, a story about four cherubs. They were not descended from heaven as in the case of fairy tales. They came from northern India with their father. They reached Malabar in a very early age. Now they can speak Malayalam, the language spoken in Malabar, fluently. They were poor and have difficulty in affording their schooling expenses. So they go to the Government School where they got free tuition.

The first day when I met them I smiled. The second day, I asked their names. Arjun was the youngest, Lakshmi was the second, Sasi the third and Ravi was the eldest of the four.
The third day I became their friend, and we played 'the smiling game', which I usually play with them now. We might be the only ones who play this game in the world. It is nothing but smiling at each other, without a break. The one who stopped first will be the loser. It was Arjun who wins every time. I wondered how he could do that! It usually takes hours to end the contest and Arjun would be smiling ever charmingly from the beginning to the end. People who possess love in their hearts can only smile so beautifully. I know.
The fourth day they were my enemies. What happened was, Sasi and Lakshmi ran inside the veranda in my house with their naked feet, full of dirt and soot. The white tiled veranda looked like a painting now. Figures were painted on the floor in dirt with their tiny feet. My mother fired me, on seeing what had happened. And I fired the four in return...
And they ran like a rocket!
- April 17, 2010 2 comments:

The Fear of Will-O'-the-Wisp.

I was not blank. But I couldn't write. For writing needs a lot of courage. I lacked it now. In Freud, I read that the lack of some things makes us go for some  other feats in life. Freud was the opener of the secret doors of the human unconscious and his comment has a direct implication on the knowledge concerning the human unconscious. My need was not to enter into the trance of unconscious creative activity, but to maintain a conscious stream of thought to support my creativity: in other words, to start writing from a conscious starting spark rather than from an "inspiration", which occurs in most of the cases as an unconscious swerve of the mind into different tracks of thinking.
In this conscious effort my mind became actively involved in some other processes, generating a sort of fear: a fear of ending up in following a will-o'-the-wisp. Will-o'-the-wisp can be comprehended as a misleading or elusive goal or hope.

Undoubtedly, it can be generalized. Every writer, in one or the other time, would have faced this fear for the will-o'-the-wisp. Fear of will-o'-the-wisp is not precisely, a fear, but many of the myriad obstructions the artist envisages concerning the work of art he is about to undertake. It is a concern or over-concern that the work he is undertaking might be hindered during its progress. In other words, it is the perplexed state of the artists mind regarding the beginning of a project. In this stage he suspects the credibility of his deemed work, rethinks the whole project and probably gives up the whole project. Therefore, this can be perceived as a crucial stage for most of the writers. Some still make the courage to swim against the stream. What I noticed is that this fear burgeons in the mind of the writer and envelops it, without leaving a single opportunity to free from it, mostly when writing takes a conscious drive through the alleys and vast untrodden realms of creativity, which otherwise is taken to, by the unconscious impulses of the mind through inspiration.
Every work of art is the pursuit of a special goal. The fear of will-o'-the-wisp forces the artist to doubt his own convictions on the successful completion and logical precision of his work.
From the known multitude of historic icons of poetry, drama, prose or any other form of art, to the present fingertip geniuses, therefore, inspiration is a very significant stage in creativity. Freud or Lacan, whoever have attempted to lay bare the deep secrets of human mind, it still is deeper and ineffable that even the inspired artist may fail to represent it with his symbols and signs and words.
- April 12, 2010 6 comments:

“To fall in love is to create a religion that has a fallible god.”-Jorge Luis Borges

"I can no more wait.
I am spent.
Though it is night and the morning is still away,
I need you to open your eyes and light my way."

"Eyes," the series of i-poems, has reached its conclusion with these final lines though the journey whose name is love is never ending. Some feel it as pain and some others experience it as the most unearthly of experiences, happiness, joy, and much more. But some feel it the same way as they feel the smell of the dirt in the first rain of June. It reminds them of something, which is neither sad nor pleasing: Inexplicable; just what many others would say about true love.

"Metaphors are dangerous. Love begins with a metaphor. Which is to say, love begins at the point when a woman enters her first word into our poetic memory." --
Milan Kundera

"Day or night, the moon,
Never complains of its plight.
For its palace is built deep inside the sky,
Just like I live, deep in your soul.
Open your eyes or close them,
I will remain there at least as a dream."

Dear readers,
I won the first prize for the Contest for Paulo Coelho's iPhone application
The Contest:
Write a short one or two paragraph love letter, from Santiago to Fatima.
The letter from Santiago to Fatima can take place anytime within the story of 'The Alchemist' or even after The End of the story. It's up to you.
The letter which touches my heart deepest will win the code to download Paulo Coelho's iPhone app.

The letter I wrote is given below:


Fathima,
I know you are nowhere here, but my eyes still search for the unseen traces you left in the air, knowing the failure in the next blink. This well gives water to everyone, but for me, it gives moments of fulfillment and agony, at a time. Everything here is for me and I transform into everything when you are here. The moment you leave, my fulfillment gets transformed into agony and my possessions into rubbles. I am Santiago, a shepherd from Andalusia, in the search of a treasure, which possessed my dreams the same way you possess me, right now. We haven't talked yet, nor touched. But I know you feel me, and know that you are aware I feel you too.
I heard from a person who hailed himself as a king that when you want something, all the universe conspires in helping you to achieve it. I wanted no agonies, no fears, no pain, but my life in the present is full of them. I can see only one way out: You; so that the tears of sorrow in my eyes get transformed into the magical smile of diamonds, in your shining nearness.
Your Santiago.
- April 05, 2010 8 comments:

“If you have only one smile in you give it to the people you love.”-- 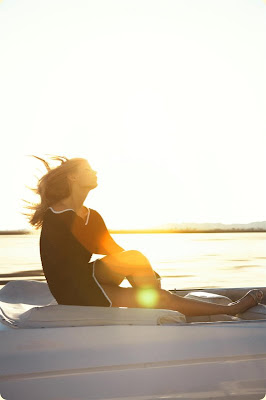