Sweetness, sometimes, is sweet in ways that are quite amazing. I have been awarded by Tia Terri, with an award that looks like an apple held out in both hands, with a heart carved in it. Indeed a sweet award. Usually, I find all the awards with some sort of name attached with it, like “Kreative Blogger Award”, or “Cute Blogger”. But this time, there is no name tag attached with this award. So I decided to name it, just for the fun of it. And for those who find it in anyway unwelcoming to your temperaments, I keep my apologies open.
The name is: Sweet Blogger Award. 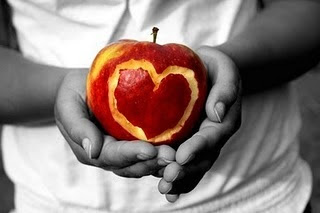 I thank you Tia Terri, for this really sweet award. In appreciating others, we appreciate our own sense of friendliness, acceptance and aesthetic sensibility, especially in the case of artistic products.
I here leave five links to the winners of Sweet Blogger Award from my blog: The Indian Commentator.
Neeha
http://wannawritee.blogspot.com/
Anya
http://anya-kareltje.blogspot.com/
Shadow
http://cuteshadows.blogspot.com/
Abhilash
http://www.bloggerabhilash.info/
Congrats Winners!!
Rain I-poems will be continued in the next post. Sorry for the temporary interruption.
- April 26, 2011 10 comments: 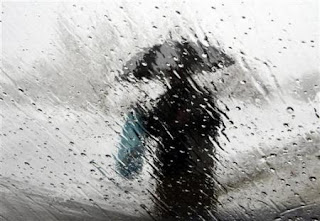 In the rain you looked for me,
And cried desperately,
By not finding me.
I was not the rain,
But the moisture lining your,
Footsteps on the cold floor.
- April 23, 2011 12 comments:

Summer is the season here in my place. And it had been raining for the past three days, especially in the evenings. Even now the sky is dark, as if it still holds the blessing of drops; cool, and comforting in the shimmering sun of the summer and the hot weather. This humble man with the destiny of a poet here jots down with all his naïve understanding, nature and human mind: Rain i-poems.
I
I counted the drops,
One, two, three and-
Gasped at the eternal rain.
And then I counted back three, two, and one.
And the rain smiled at me,
In my transformation,
Into a child.
- April 20, 2011 4 comments:

Out of all the malignity on the earth, a creature was born. It lacked everything that is human, except rationality. And in every aspect of existence it was anti-human. It was called: Macabre.

On day it abducted Archangel Michael. Although, Michael could resist its powers successfully and destroy it easily, he succumbed, so that he can test it, as done by those who are wise. Macabre wanted to get a blessing: the power to consume the whole of humanity.
“I can’t give you a blessing that could result in destruction,” the said. Macabre knew what Michael said was unchangeable. He was aware of the powers of the , who could perhaps destroy Macabre with a single swirl of his sword. And he also knew that Michael was testing him.
“Then give me a curse which though holds the power to destroy me, could satiate my desires.” Said Macabre, instantly without giving in, and what he meant was eating up the whole of humanity.
He came down to the earth to eat all the humans alive. But he could not eat them and without food for months, became tired.
He was about to die when one angel who served the Enemy, Satan, happened to visit him. “What pity had befallen upon you, my strange friend? Who caused you this trouble?” he asked Macabre. Macabre could not move. He even found it difficult to talk. But he somehow narrated the incident.
“It was Michael’s blessing.”
“But I heard it was a curse.” The angel said.
“Yes, it was,” Macabre managed saying, “it was a curse which would benefit me.”
“What was it?” the angel asked in surprise.
“He cursed my hunger to increase; I can eat as much as I want, but only humans.”
“Then what happened to you now? The earth is full of humans. Can’t you consume upon them?” the angel asked with great curiosity.
“I can eat humans, but have a problem,” Macabre said, “I can eat only those who do not love anything.”
And he died.
- April 14, 2011 4 comments:

There is a story that is prevalent in the country sides of Muzhappilangad; a story in which there is a fisherman who meets mermaids in the sea when he goes for fishing. He used to tell them stories. The mermaids loved his stories very much that they became his friends.
He had taken a huge mortgage on his only boat to feed his family full of children. One day the money lender came and asked for the returns. But the fisherman was in a poor state. He did not get enough fishes every day even to meet the daily requirements of his family. Not finding enough money the money lender became furious and took his boat. The story ends by saying that the mermaids helped the old man discover a hidden treasure in the sea and get his boat back.
I knew this story from one of my friends who belongs to this region. It was in my first visit to Muzhappilangad, I still remember, that he told me this story with a great pride for his local tradition and contempt for the advancements of the modern world. I remember he belongs to a one-of-its-kind ideology that retains its antique roots even today in this world: Communism; a dogma that exists with all its glorious paradoxes in this part of the world called Kerala. No wonder why my friend likes all the antiquities, even the stories of the Utopian ‘Mermaid socialism’.
There is indeed a flavor of innocence over this folk tale. But what reminded me of this story is the real thing. During my second visit to Muzhappilangad, I met an old fisherman. His name was Anandan. He might be more than 75. He lived with his grown up sons, who were fishermen as well. I approached him for a ride in the sea to the nearby island, but he declined my wish saying he was old and can no longer be able to handle the oar. His sons might be ready when they are back home after work, he assured me. But I decided to reconsider the idea of visiting the island, which till this date remains un-attempted. I was not very sure about his sons. These young fisher folks could charge you far greater than what they really are worthy of; I remembered the practical wisdom whispered into my ear by my friend.
While we were discussing our plan to visit the nearby island where no-body lives the old man started recounting his old tales. He told us a story, a true story that happened in his life, and it was this story that scuffed out of my mind the story of the mermaids. He had an old boat, which he kept very dear to him on the shore under the shade of a tree, because he could not go to sea due to health reasons. He never let any one take away his beloved boat. The boat occasionally took him, though, to the sea and he tried his hand in a possible moderate catch each time.
One day he found the boat under the tree, and the tree was over the boat, broken. There was no storm the other day or rain.  He said he cried all day and night thinking about his beloved boat; the souvenir of his youth, and living; which was broken into two pieces from the middle.
Days gone by, he had almost forgotten about the boat, and one day he found a surprise on the shore, just like something straight out of a fairy tale: a boat. The boat seemed lost and wrecked. It seemed that the boat had been swept on to the shore from the river mouth.  The fisherman said he could not think about the boat alone. He thought of the owner of the boat as well. The owner of the boat might be worrying had it been swept ashore from some where, and might be searching for it, too. And that was the truth. Three days later, some people came to the old fisherman looking for the boat. Happily, the fisherman gave them the boat. In return they gave him some money.
The owner of the boat is really happy about getting it back, because the boat was his life’s achievement in setting up a boat-service across Muzhappilangad and Dharmadam, two nearby villages separated by a river that opens in to the Arabian sea; my friend was saying from behind me. I wondered if this story is so famous that he already knew it. No, he nodded. “I was the owner of that boat,” he said.
- April 06, 2011 3 comments:

Soon the globe will shrink into one white ball. The race of life will follow a twenty feet long pitch. Enthusiasm will flow into a stadium to merge with the human sea. The cricket god will come out and embark on his journey to bless and calm the sea, with the charismatic gestures of his bat. Spells may be broken, but some might work. Life will then be known by another name: Cricket.
will be transformed into a ritual of magic and passion, of cricket. There is nothing that can repel the magic; that can dispel the forces of this sportive madness. Indians love cricket, for it is one of their basic needs of any one born in this country, verged by sea on three sides, and the , as the crown.
Let the sweat spill. Let the profane passion be unbridled. The time has shown itself on the gate of the fortress. Let us be prepared to cheer our warriors, for the battle is on its way. Let us remind ourselves that every Indian has one blood, like every game is played on a single pitch at a time. Be prepared.
Wishing Team all the very best for their Final match in Mumbai.
(taken from:The IPL Article)
- April 02, 2011 No comments: