On 30 October 2014, during a rainy day, just after sunset, the people of Kochi were said to witness an Unidentified Flying Object (UFO) in the sky: Author Anu Lal analyses.
Drawing a circle of fifty-kilometer diameter with Alapuzha at its centre could cover both Kochi and Pathanamthitta well within its boundaries. With evidence of bird flu of H5N1 type in this region within weeks of the UFO’s appearance, the connection can be more than just a co-incidence. Whether what had happened could be explained away, using rational explanations or scientific theories or not, is not the important question here. Is there, actually, a connection between the UFO and the H5N1? The authorities should establish the connection if there is one. And they must, also prove it scientifically or by any other means possible, if there isn’t any.

To this day, however, the government gave no explanations, and no media have taken a serious look at the possible “UFO-bird-flu-coincidence” either. What makes me think about this UFO event at Kochi, is the complete lack of any form of reference about this event in the media, except the day after the sighting, when a couple of English news papers ran the story, print and online.

The Kochi UFO sighting that transpired on 30 October 2014 is the first of its kind ‘reported’ in Kerala. Not many Indian people are familiar with the history of Unidentified Flying Objects in India. Ramayana and Mahabharata, the two Indian epics, are filled with depictions of flying chariots and “sky people”. The recent blockbuster documentary on History Channel, titled “Ancient Aliens” narrates in detail some of the ancient connections this country had with civilizations existing outside of planet earth. The technology or flying machines, laser guns, and nuclear weapons, etc. were used as motifs in the grand narrative of Ramayana and Mahabharata.

I do not think many of us paid attention to this news item that appeared recently in a national daily. In a news story published in 15 July 2014, in Times of India, Rashmi Drolia reports that 10,000-year-old ancient rock paintings were discovered in Chhattisgarh, Central India.
“The paintings are done in natural colours that have hardly faded despite the years. The strangely carved figures are seen holding weapon-like objects and do not have clear features. Specially, the nose and mouth are missing. In few pictures, they are even shown wearing space suits. We can't refute possibility of imagination by prehistoric men but humans usually fancy such things," the newspaper quotes an archeologist. [courtesy: Time of India, July 15, 2014

The space-suit wearing people are quite similar to what has been discovered in the Petroglyphs of Phoenix, Arizona, and from many other cultures across the world. This, undoubtedly, points towards a possible connection of the Indian culture with cultures outside of our space and time. Considering the 37th parallel concept along with the closeness to equator India enjoys, one can easily connect the dots of similarity among ancient and modern UFO sightings. Geography could be a crucial factor that draws this phenomenon close to our territory.

The UFO that appeared in Kochi is reportedly “needle-like” and has many of the characteristics, usually reported in similar cases. Does this prove that in Kochi, Kerala, we compromised our aerial security?

UNEXPLAINED SILENCE: Does Anyone Care About the Kochi UFO?

On 30 October 2014, during a rainy day, just after sunset, the people of Kochi were said to witness an Unidentified Flying Object (UFO) in the sky. News media reports say that it was raining, and the sky was cloudy. A few lights were spotted in the sky. Apparently, after a few moments, the UFO vanished “under the cover of rain and passing clouds”, as per the report in a major online daily. Most of the mainstream media have carefully used the term “UFO-like lights” to describe the appearance of lights in the sky.

The popular translation for UFOs in Malayalam language, the first language of Kerala state, is “Parakkum Thalika” or Flying Saucer. Kochi is a metropolitan city that plays a very crucial role in the economic and cultural life of Kerala. Kerala sits close to the equator and is one of the southern states in India. Could this UFO be a visitation from extraterrestrials through the equator region?

A few weeks back, I came across a video documentary in You Tube titled The Unexplained Files. This program was originally telecasted in Discovery Science channel. A retired Deputy Sherriff named Chuck Zachowski finds a strange connection between the presence of strange mysterious lights and the line of Latitude known by the name 37th parallel. This might sound a fascinating sci-fi story. Only it isn’t. Often people who come forward with credible evidences are people with authentic credentials. The investigation itself is done by a retired law-enforcement officer and, of course, is done with methods that are accepted and used commonly by all civil and military organizations across the world.

This suggests that if the 37th parallel theory is even close to the idea it proposes, there could be a real possibility with the UFO event that occurred in Kerala. Whether it’s a possibility or crisis, only time will tell. Until then, this event will remain yet another instance of unexplained phenomena.

India Today and Deccan Chronicle are the two major English language Indian newspapers that reported this event, and it is not quite surprising why other local media kept silence on this issue. Kerala has a strong literacy rate (93.91). Rationalism here has built its boundaries quite near to reductionism. UFO events and discussion on the subject are certainly frowned upon. Talking about life on other planets is a fantasy, and matter of “crazy” Hollywood movies. “It’s not real,” you might probably hear your parents yell at you.

What raised the quotient of reality considerably upward in the Kochi UFO incident is another event that was triggered next. Within one month of the UFO incident, bird flu, due to H5N1 virus, announces its appearance in Kerala. Three districts are apparently affected: Kottayam, Alapuzha, and Pathanamthitta. Out of these three, Alapuzha and Kottayam are situated well within fifty kilometers from Kochi.

Kochi is known for its maritime activities even from ancient times. It’s been a busy port town and according to historians, the ancient Greece and the Egyptians had their contacts with Kochi. Ancient name of Kochi was Balapuri. In present day Kerala, Kochi is an important metropolitan city and resides in the district of Ernakulum. Could there be a connection with the historical importance of Kochi and the UFO? Bird flu virus has been reported from two nearby districts, as I mentioned earlier. Is it merely a coincidence?

LOVE-MARRIAGE: How to Convince Parents?

Once, in the class I teach, there came a point where everything seemed too drowsy. I did not even know what went wrong. Although I was explaining the author’s ideas on how women were ‘treated’ after marriage by their partners, something was missing from the class. I have always felt that acting on immediate spur during a particularly monotonous and routine process, could rejuvenate the situation. It is as if a stream of creative energy flows into my being and I share it with everyone else surrounding me.

At the spur of the moment, I decided to ask three questions.
1. What is marriage?

2. Which form of marriage do you prefer?
3. Which is the marriageable age in your opinion, for both boys and girls?


When even their dating is pre-arranged by their respective families, it is a question to what extent one’s independent creative self could harmonize itself with the mechanical processes involved. What should be an organic process of meeting individuals turns into an orchestrated ritual guarded safely by the family.

I made my students promise, nothing in our discussion should go out of this class. Then our discussion continued. However, I still noticed some reluctance on their part to use explicit terminologies such as “love marriage”. Some of them had other ideas of marriage to discuss too. So I invented this quick metaphor. I said, “Let’s consider arranged marriages ‘ration shops’, where one has only limited choices. Also, consider love marriages supermarkets, where you have plenty of options to choose from, on your own.”

Then I urged them to suggest their ideas. I was looking for what each of them thought about the second question. Which form of marriage do you prefer? When family arranges marriages, proposals reached the man or woman only through the family. In other words, the individual’s say was only limited to the later part of the selection process; the first selection would already have taken place. This was the reason why I used the ration shop metaphor to suggest arranged marriages.

One of the students stood up. He said smiling, “Sir, I would like to go to a ration shop inside a supermarket.”

What he mentioned was a phenomenon the late 90s have witnessed in the culture, popularly known “arranged-love marriages”. Though it sounds a bit paradoxical, this super baby is born out of the nuclear family culture. The nuclear families could not afford to lose their only son or only daughter just because they had made their own choices in selecting their life partners. So the boy and girl would come to their parents and talk about their relationship, as usual. Here is the blessed part: after much word-battle, in some cases, if the family is traditional or orthodox or due to some psychological reason with the father or mother figure, the parents consent.

The good news is that within urban societies in India, “arranged-love marriages” are gaining popularity and acceptance. So love, finally, is on the march.
This article is first published in http://www.nexttimelucky.blogspot.in/
ABOUT THE AUTHOR: 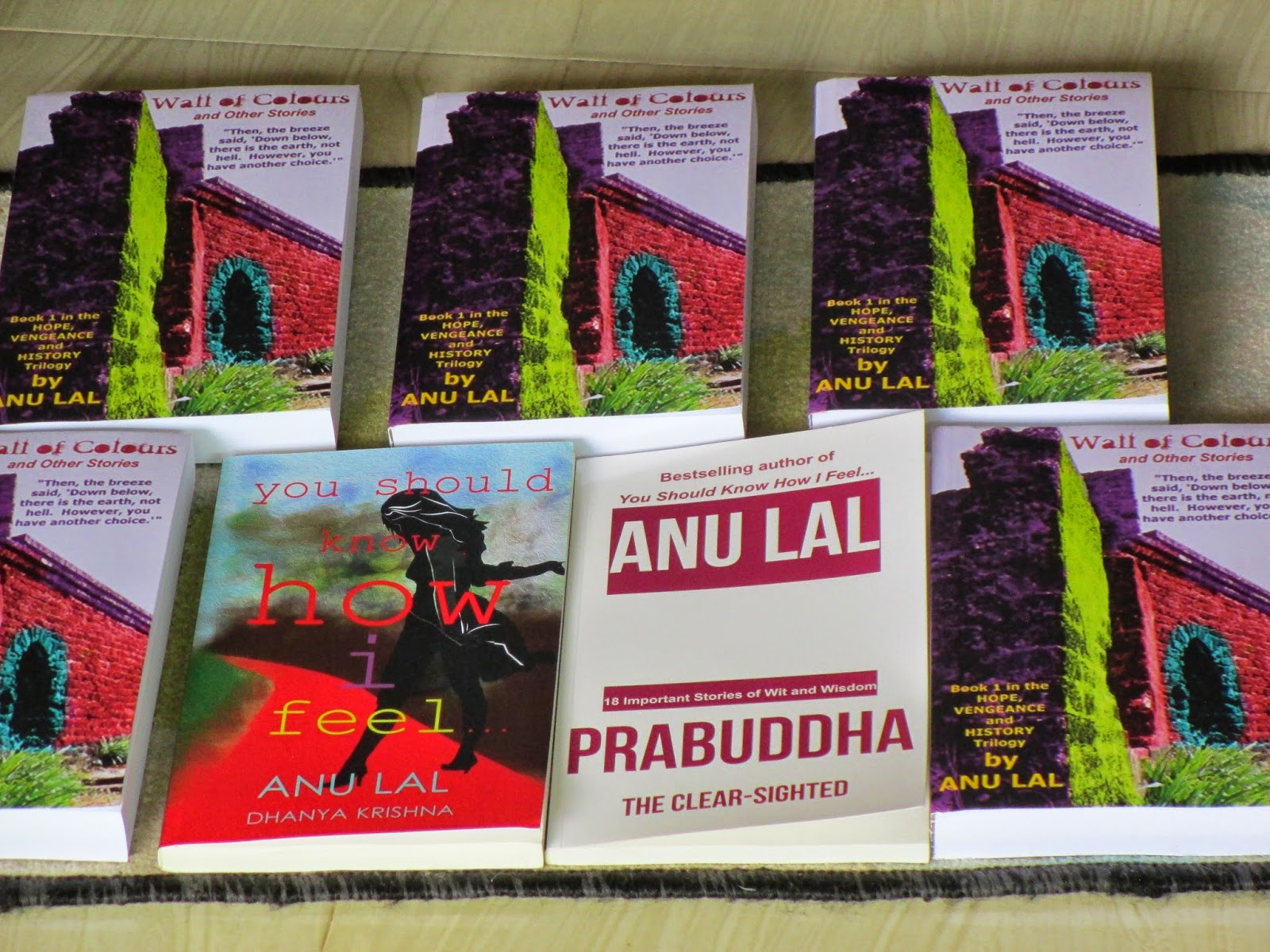 Anu Lal is a bestselling author, book reviewer, blogger, and educator. His recent book, You Should Know How I Feel... has been a bestseller in Amazon India.
He is the first Indian author to write a trilogy in short story collections in English. The first book in 'Hope, Vengeance, and History' trilogy is Wall of Colours and Other Stories, which is published in July 2013. His latest book is Prabuddha:The Clear-sighted.
Book-2 in the 'Hope, Vengeance, and History' trilogy will hit bookstores across the world, in January 2015.
He blogs at THE INDIAN COMMENTATOR.
- December 23, 2014 2 comments: