What Type Are You? 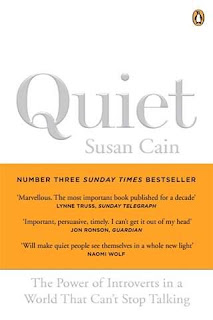 The first part of the book is titled ‘The Extrovert Ideal’. As I plodded through Part One, I felt more drawn towards the tactics and means employed in order to equip people to be better public speakers and team leaders. The idea that if you can talk unhesitant and on a short notice, your presence would claim a considerable authority. People like fast talkers and enthusiastic go-getters. The down side, of course, is that those who feel uncomfortable about talking aloud in classrooms or in public gathering would be marginalized.

Ever since, I started attending school, no one ever found me in the school sports or arts festivals. Once, when I was forced to participate in an oratory, I stopped the speech in the middle and realized if I stayed on the stage a moment more, I would faint. Those were great lessons of human psyche to me, first hand of course, that people faint when faced with extreme stress.

In sports, thankfully, I never qualified the initial qualifying levels. Although I was athletic enough, a certain lack of inertia held my limbs tighter than how the tar holds the roads in Kerala.

I knew what my problem was. Someone had informed me. Perhaps, one of my parents, that I am an introvert. It sounded like ‘caveman’, for the ten year old that I was. Someone told me, when I was reluctant to go out to play with other kids that I should not behave like an introvert. That is bad, they said. ‘Bad’ meant dirty, unacceptable, secretive, and this might lead me to delinquency, they warned me.

I had thought that introversion was something like a habit, then. I did not know where I picked it up, though. Anyway, the next best thing was to ‘improve’ my personality. That’s when an individual begins the incessant struggles to fit in. Everyone who lives in such a social set up must have realized where I am driving at.

From her introduction onwards, Susan Cain drives towards the same direction. In Part One, however, what fascinated me was how a culture has found out the measures for an individual to stand out and lead. This was what I was talking about in the first paragraph.

Yes, indeed, this is the quest for purification of personality, in order to attain some sort of outgoing persona. This desire governed much of my childhood. I also suspect that my increased curiosity about how to be an influential person with spoken word has to do with the profession I handle as my day job—teaching.

I meet students who are on the extrovert side, mostly, and others who are introverts. I also find ambiverts in class, a term I learnt from Susan Cain’s book. Part One of Quiet follows the history of how American culture changed from the “Culture of Character” to the “Culture of Personality”.

It is impossible for me to go back to that memory and think about myself standing in front of those many people at my school, in that public speaking competition. Although I had memorized all my speech thoroughly, the pressure was so much that I could not keep track of it at all. My dad had written that speech. I felt I let him down. I really did.

I still remember, in another speech, which was conducted exclusively in classroom, asking my family if I could pitch an idea all by myself, right on the spot, as if it is a reply or supplementation of the previous speaker’s words. Countering, arguing, and being spontaneous to the moment seemed fun. Remember, the same scared owl dropped the platter in the middle of the speech, the previous time. However, my family told me not to attempt this bravado at this point. Later in my life, I realized that I was a better public speaker, if I were spontaneous. Being an introvert, I had figured out to tackle the issue of forgetting the words I memorized and building confidence in front of the public, though I never really got a real chance as a kid to practice this.

Quiet will let you know about yourself or at least what type of person you live with, in a skillfully nonjudgmental way.

This book review is sponsored by Mysmartprice.com.
- September 08, 2013