The Way Back: A Film Review

Policeman: “Welcome to India. Paper-passport please.”
Janusz, (smiling), “We don’t have any.” 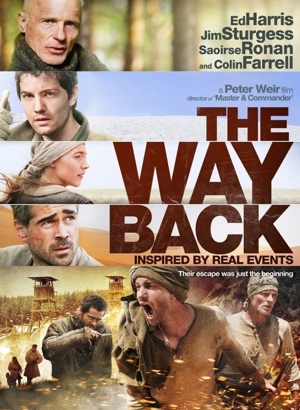 Adolf Hitler sent his prisoners to concentration camps, while his Russian counterpart Joseph Stalin sent away the ‘enemies of his state’ to Siberia to rot and die. ‘The Way Back’ is a drama about how a group of prisoners escaped from a Siberian Gulag camp. Most of them were arrested and sent away for charges that have nothing to do with what they did in person to the state, but what the state thought about these people. Some of them were arrested for just taking photographs of the Leningrad, accused as spies.

Janusz reaches the camp for charges of espionage. Through his life, the story develops and many other characters come across, all in need of hope and liberation. How Janusz offers the inmates the hope of freedom may remind us of Moses and his legendary march out of Egypt with Israelites. Although he gets the idea of escaping from the camp from another inmate, he realizes that no one else can make this happen other than himself. So Janusz brings together a group of people including an American, played by Ed Harris, named Mr. Smith.

Even the name Janusz is meant to evoke a sense of liberation, transition, and a new beginning. Janusz becomes the beginner of hope for the six inmates, Mr. Smith, Valka, Voss, Tomasz, Zoran, and Kazik. Janus is the ancient Roman twin faced god of beginnings and metastasis—a clear indication of classical theme, which validates the association of the story with the “Chapter of Exodus” from The Bible. ‘The Way Back’ apparently proclaims that escape from totalitarianism into liberation and hope is a journey guided by providence into salvation. They walked 4000 miles to reach freedom, India.

If you watched ‘Defiance’, the 2008 film, directed by Edward Zwick, then you would find a parallel in ‘The Way Back’ and like it deeply. Still, ‘The Way Back’ pursues in a more philosophical angle into some existential questions unlike ‘Defiance’. In ‘The Way Back’ the characters are driven by the motive of liberation and finding purpose than just a desire to live. In the first part of the movie, one inmate asks Janusz what if they all die in the attempt to escape from the camp. Janusz replies that they will die free men.There is more physical violence in 'Defiance'.

Very less humor is a feature of ‘The Way Back’. Only in the last scene in a sequence of stressful action, do they deliver something quite close to a cheerful remark. This happens at the Indian border, a dialogue from which scene at the start. Some of the characters, among them die, as Janusz had said the death of free men. Only three made into the Indian border, after a tiresome and hazardous journey through storm, snow, and desert. This World War II movie is directed by Peter Weir, and is inspired by the book The Long Walk (1955), by Sławomir Rawicz. The 4000 miles journey from Siberia to India was full of extremely hostile experiences. Poignantly portrayed characters and the haunting story line makes one feel, in the 133 minutes, as if along with those seven strong men and one woman, one has lived a lifetime.

This is your Saturday Flick.  HERE for more.

"Adolf Hitler sent his prisoners to concentration camps, while his Russian counterpart Joseph Stalin sent away the ‘enemies of his state’ to Siberia to rot and die." What do you the Indian Govt does?