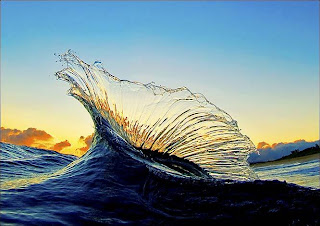 “There are not many readers in your blog these days, are there?” some one commented. I didn’t say anything in return. Instead, I decided to quote this story here.
The people who live in the shores of Dharmadam say that each drop of water in the sea has a unique life. Each drop is special and has a destiny to fulfill. They use this story, to explain this principle to the younger generations.
“Once, a drop of water in the dreamed of becoming honey. But it knew that upon the surface of the sea, which is full of salt, his dream would never be possible. So it decided to pray to God. The water drop rose to the surface, and swayed upon a wave, up and down. Even though, it appeared merged with the seawater and the thousands of drops surrounded it looked alike, many of the sea dwellers had found that there was something different with this drop.
“A shark came by and said to the drop: “Every water drop at one point in its life would be transformed into honey. It’s a natural process and no one waits for it. But no drop ever would have done what you are doing now; proclaiming your desire and to pray for it. I pity you.” And it took a deep dive and disappeared. The drop became sad. But there was someone who was constantly watching over the enthusiastic drop: the sun.
“As the sun saw the confidence of the drop sinking, it shone brighter and warmed the drop. The drop evaporated and reached the heavens. It became a cloud and traveled to the land. When the rain poured over a beautiful garden, the drop was caught by one of the flowers and transformed into honey.”
“This is how the younger generation of storytellers ends their tale. And they would say, the message of the story is perseverance,” said the man who told me this story. “But the real story doesn’t end then. The story has much more to say than just teaching the importance of perseverance.” He was an old man, well beyond his seventies.
“The drop of water transformed into honey. It was golden brown, sweet and delicate. Situated within the flower, it had even had fragrance. The drop started considering itself to be more prominent and started constructing rules for others rather than following its own destiny.
“‘No one must touch me,’ it said as the bees approached the flower for reaping honey. It even made a bad face to the bees. The sun saw this again, but this time didn’t do anything. Slowly, as the time passed, the flower started withering. One day it fell down, and found by the ants. When the ants came for the honey, the honey became infuriated, ‘The flower was weak and could not support me. That doesn’t mean I would come along with you. Go away,’ it said. And the ants went back. The sun saw this and didn’t do anything again.
Finally, one day the rain came back again, the same rain through which the drop made its transformation possible. But this time with the rainwater that formed streams upon the land, the honey was washed back to the sea. And soon it became yet another drop in the saline vastness.”
The old man then said, “Some would end their story here; especially those in their middle ages and say that life always goes back to the start and the sense of loss is permanent to life. But those who know the real story would not stop it here. They know that much of adventure is still to come and life is not a hopeless return to where we began, but a journey that appears cyclical, though each time we are taken to meet a different world, full of different possibilities.”
I looked at him disbelieving. “Another day, the sun heard this pleading: ‘I made a mistake. I would not repeat it again. I was trying to be myself, a drop of the sea water, even when I was given the chance to be the sweet honey. I realized my mistake and would not repeat it. Forgive me please, and give me one more chance. This time I would feed the bees and wouldn’t insult the ants. I have learnt how to respect my transformation.’
“The sun looked down. It was the same drop. Gleaming and swaying back and forth upon the shoulder of a wave. The sun shone brighter and the heat became large.”
***
This is the lesson in blogging too, I believe. Over the course of this journey, I have met people, shared wisdom, learnt new things and humiliated for my own incapability. Success is like seasons. Life is a cycle of opportunities and chances to excel at each turn.
My special gratitude goes to the respectful old man who shared this beautiful and witty story with me and made one of my evenings memorable on the shores of Dharmadam, much close to the drops of the Arabian Sea.
Today's Readers: 118
- December 20, 2011

Success is the most temporary thing in this world. And if it goes to your head it will leave you that moment.

Six years down the lane I think the crux of blogging is writing what you feel.

Thanks for this story:)