It is said that those who die, become a star in the sky. This story is dedicated to that star who told me several wonderful stories, and enlightened my mind; my grand mother. May her soul rest in peace.

“Silence is the language of the cosmos. From the smallest stone to the sun itself, they all communicate through silence, greatly rich with meaning and deep, very deep. In order to understand it, we need to have a special mind. You have it, don’t you?” A pair of eyes, surrounded by numerous wrinkles, slowly connected themselves with the boy’s.

He was silent for the next half of a minute. Yet another story! Why do old people tell so many stories? How do they remember a great many of these details? And how on earth does she know about the language of the cosmos? He thought.

“Yes, you know. You are like that small stone that wandered all around the cosmos to find an answer to what puzzled him for a long time,” the grand mother said.

“What stone? A meteorite?” The boy looked up at her; the old face smiled with the creases of old age forming an art work of smile, with least effort.

“Yes,” She said. “The stone was wandering in the universe, asking for an answer. It wanted to know how to make others happy.” Then there was a pause. There was something that the old woman wanted to read from the face of the young boy. But the boy looked away.

“The little stone, met the Saturn. Saturn offered the stone a place in his colorful and vast belt of stones. But the stone wanted an answer. How to make others happy? Then it saw a gas planet. But the gas planet offered the stone a passage through it and said something the stone could not understand. Remember, silence is the language of the cosmos, and therefore no one can evade an answer. Something has to be told, something you will listen. That deep is silence.” She paused. The boy was now looking at her as if bewildered at the magical depth of silence.

The old woman continued, “the little stone met many planets, stars—hot and cold, but could not find an answer that made sense to it, and then it crossed Mars. ‘It’s futile to try to make others happy,’ the silence of Mars said. ‘Live your life with whatever you come across and make the best use of every opportunity to live your life.’ The message was great and the stone moved on.”

“—was that the answer it was looking for?” The boy intervened; with his eyes full of the same quest that of the meteorite.

“On its path to circle the sun, the stone then visited the Moon. And by that time the stone had grown wiser from meeting many planets, stars and clouds, and learning from them. It said to the Moon, ‘I know it’s impossible to make others happy, and I must live my life making use of the best of opportunities. However, this is the ultimate end that I see to my life; making others happy. This is the only thing I want to do. How can I do it?’

“The Moon smiled, spreading its golden rays around and said, ‘you are already doing it.’ The stone was confused at the reply of the Moon. It asked, ‘what do you say? I don’t understand.’ The Moon, seeing the confusion on the face of the stone, smiled again as if playfully teasing the stone. The stone’s face grew darker. ‘Don’t worry. You will see what I mean. Go to the Earth and ask her,’ the Moon said.”

“What was that the Moon said, Granny?” The boy asked. 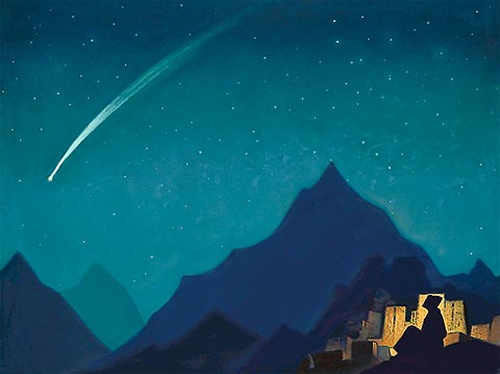 The grand mother’s eyes gleamed. She resumed, “The stone approached the Earth. Before it could ask anything, there was something that took the attention of the stone; a bright line of gold upon the surface of the sea. It was the most beautiful sign the stone had ever seen. ‘What is that?’ the stone wondered. Then it found something else too; the creatures on the planet, humans and animals, all are waving up at him, smiling, praying, wishing, and happy. The sea was reflecting the shining air that the stone carried with it, its own golden tail wisdom. ‘You are already making everyone happy,’ the Moon’s silence echoed through the air.

“The stone was happy because it received the answer it had been searching for. Then the stone became a shooting star and shined down to meet the earth and disappeared in the air, leaving a tail of happiness forever.” The grand mother finished her story and looked at the boy. He was asleep, dreaming, perhaps searching for those shooting stars that wander in search of how to make others happy.
- December 07, 2011

Lovely story, Me Ho.
You know my thoughts have been with you. Thanks for the kind words on my blog.
Hugs
Tia

Thank you Tia for you supportive words and care.
Hugs,
Me Ho