A FLIGHT OF PIGEONS: A review 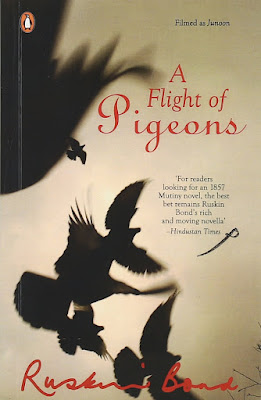 The Commentator says;
A Flight of Pigeons is a short novel says the publisher in one of those unqualified statements in the blurb. This book, in truth, could easily qualify for a novella. The Old Man and the Sea is a novella; a long story that is not a short story in its scope. A Flight of Pigeons also gives off a similar vibration. Author Ruskin Bond carefully constructs the historical tale of Ruth Labadoor and her family’s escapades during the massacre that took place during the first war of Indian Independence in 1857. Ruskin Bond is charming with his simple and lucid narrative style. Ruth’s family, although Christian, has Muslim roots. The Commentator feels that this may be unheard of in the West, a church-going family with Muslim relatives. It is also unheard of in the Indian subcontinent, where a Muslim family could never be related with a church-going Christian family. The story is set in Shahjahanpur, a small town.

There is a sense of relevance in this theme, as Bond himself observes in the introduction he wrote. In the post-9/11 world, this relevance takes on a deep political and therefore academic interest too. The introduction written by Bond appears a bit of an exaggeration in terms of religious harmony portrayed in A Flight of Pigeons. However, the Commentator thinks that this sense of exaggeration is short-lived as one enters the length and breadth of the story. In A Flight of Pigeons love and friendship wins over religious bigotry.

Murdering a British was politically correct for Indian troops in 1857. Ruth’s father was brutally murdered in a church, in Shahjahanpur, along with other British officials. His body lay in the courtyard of the church for two days. Lala Ramjimal, a friend of Mr. Labadoor, takes care of Ruth, her mother Mariam, Ruth’s grandmother and others who are part of the Labadoor household in his small house. The family hopes to hide until the rebellion is quelled and the British recaptured Shahjahanpur. The irony is that Mariam, whose family is Muslim and who bravely faces the tribulations of the rebellion, could not reveal her hopes of survival. Javed Khan, a commander under the Nawab, discovers the family from their hideout.

Javed Khan finds Ruth to be very attractive. Although he has a wife, he wants to marry Ruth. However, he is a gentleman and cannot marry a woman without her family’s permission. So he begs Ruth’s hand in marriage from Mariam. She being a wise woman postpones the inevitable as much as she could. The novels moves towards its denouement while keeping the suspense and uncertainty of the characters’ lives intact.

The author claims that the theme of the novella is a true story. In the section in the book named “Notes”, several news items are quoted from late nineteenth century to validate this claim. The fight for one nation’s liberation becomes the cause for a family’s tribulation. The Commentator feels that any reader would race down through these pages until the end of the book just to see if the family survives the pathans and native rebels during their run for life. The Commentator recommends A Flight of Pigeons to those who are interested in reading political novels. This book would most certainly surprise you with its directness in declaring how the political ruins the personal.

A Flight of Pigeons is quite different from the regular Ruskin Bond style. Ruskin Bond mostly writes about nature, Dehra Dun, small towns, and tales set mostly in present or contemporary time. However, one may observe elements of nature surfacing with a typical Ruskin Bond touch when the author touches upon the topic of rain and narrates how it affects the life of the main character.

This book is made into a movie titled Junoon by Shyam Benegal, with actors Shashi Kapoor, Jennifer Kendal, and Nafisa Ali playing the lead roles. The year was 1978.
- June 01, 2016

Thanks for sharing this piece of information :) Very nice of you .. very well written...