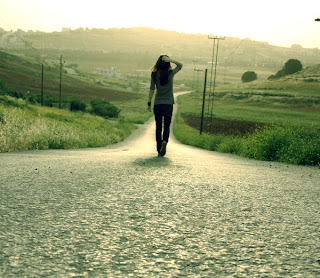 Stories, made, will only digress us or lead us away from what we think of where we should be. But a story teller becomes great when that one 'finds out' the stories from his environment, rather than 'makes them up'. The listeners should feel the stories inextricably linked with their five senses and in a later effort should be able to read them from around, clear, living, and pulsating. Never, a cooked up story has life, or even if it has, it will be of poisonous nature.Stories exist. One need the technique to find them and can read. No loss of reality happens in reading them-- for they are found out from the reality in which the reader lives-- but only a transportation. We are transported from one reality to another. Thus, there are realities, and not a single only 'underlined reality' on which life rests like the boats and canoes on the vast waters, vaulting and drowning, stuck on the water, as if 'escape' seems to be the last word to be called sane.

Meeting people and talking to them: is this the apt way to find stories? In front of an inspired writer, or a story teller stories themselves will appear, but when the magnetic moments of inspiration fades, stories run on the contrary, away from the story teller. It is then, the search begins.

For a fruitful search any path is allowed, except the one, which takes one, directly to the point of victory because then, the search becomes meaningless and the lessons, which otherwise one would have experienced, in the wanderings and digressions are never learned. A search is learning. It primarily provides us tools, which we can use in the attainment

of victory. A story teller's search also 'only' teaches the one, how to find the story and read.

I too was in such a search, all these weeks from the start of November. But I couldn't reach anywhere in the lessons taught by my search. There are much to learn and I was eager too.

It is difficult to know exactly when your search would end. When it ends, one will simply find oneself in another reality, another world,because once your search equips you, the whole perception changes and thus you emerge in an altogether different world, a different reality. Take putting on a red glass as an example or a magnifying glass. The result is a new reality, a different perception. The search ends and no one knows when, but simply being equipped for gaining victory over the inhibitions, over the prejudices, over the limitations of sight, the one gets transported into another reality; a story teller to his or her success, the long expected, the sacrosanct, the realm of the story.

And I am hopeful about my search too that it will equip me and prepare me for having some new perceptions and new stories in the path I am moving on, and in the world I am living.

Hi Anu...I hope you don't mind but I found a few things that were odd to me...
I clicked on the link...did you know you title over there says "Searchig"? I think you want it to say "Searching".

"What uses else?"
The way you have this worded is a bit ackward.

Hope you have a super week!

Thank you so much Tia, for your suggestions. I would surely correct these mistakes.
Have a nice week.

Thank you so much Anya. Have a nice day for you too!!

May god bless you to 'meet' numerous beautiful stories.

Thank you so much Shamna.