“There is a crack in everything that is how the light gets in”—Leonard Cohen.

When a story is born angels smile. They rejoice along with God, for a story is the writer’s resurrection under the shade of words, calling for spaces so close to the signs with endless meaning, the young writer thought. He was sitting alone nearby a river, which was deep enough to swallow even a huge mountain. He was about to make the most crucial decision in his life; he was going to die by flinging himself into the depths of the river.

The sun shone bright in the sky. His tears dried up on his cheek. He stood up and moved closer to the river. But then he heard something like a murmur. Was it an animal? It could be an animal. The place was near to the forest. Would this animal kill him first? Being a failure in life, he had decided what his end should be like; he had prepared his mind to be drowned in the peace of the river, to commit suicide. It was a sin, according to his tradition. He knew he was making the angels sad, and God unhappy. But he knew this well, too that no angels smiled at him yet, and God hadn’t yet had shown signs of joy over his existence; he could not become a successful writer. The young man repeated to himself: “I am right, this time.”
He did not see any animal. He waited with a pounding heart. Then he heard the voice again. It was now a whisper…. “Once upon a time..,” it said. The voice grew bolder. He recognized the voice. It was the voice of the storyteller who lived in the mountains. No one in his place was much interested in his stories, but still every one found him at the market place, where people gathered in the early evening. He told them his stories there. This was almost a ritual, and would go on till late night. The young writer too, never went to listen to his stories. Who in his sane mind would? Most of the days it were thieves and lonely beggars who listened to him late after the sun set.
The young writer wondered how the voice of the storyteller could get to so far a distance, to the river shore. The mountain range was kilometers away from the river. It might be the wind that brought his booming voice covered in its cloak; insane wind, thought the young man. He suddenly felt a new idea and it forced him to think something else. Even though everything was decided, why not take a turn in the path and come back after giving a visit to the old man, the unpopular storyteller, in the mountains.
He took his bicycle and drove towards the mountains. After reaching the foot of the mountains he had to abandon his vehicle for it could not take him over the hazardous twists and turns of the mountain path. It did not take him long to reach the house, on the slope of the mountain. An old man was sitting in the verandah, writing something, frowning over a white paper. The storyteller looked up from his work as he heard the footsteps of someone approaching.
The young man halted politely nearby. “Who are you?” The old man asked.
“I am a failure.” The young man replied, irritated upon his own decision, now, to visit the old storyteller.
“Ah, my fate hasn’t given up yet! All failures first visit my door step, before entering the world.” The storyteller looked frustrated, too. “Why are you disturbing me? Can’t you see I am at work?”
“What are you working at?” The youngster asked curious.
“Why, I am working at my new story.” The old man retorted without looking at the youngster anymore.
The young writer felt a huge lighting bolt striking his heart. Questions welled up in his mind. Will it be rude, if he asked them? After all the old man was a harmless person, who always tried to entertain the people of the town. He never heard the old man harboring any ill will against any of the town’s people.  That doesn’t matter, for everything was sure, absolutely, undeniably sure. He was going to die.
“Do you know something old man; nobody in the town likes your stories. Then why are you working on new ones? Why don’t you stop betraying yourself?” The young writer blurted out.
As the storyteller looked at him, again, in his eyes the young man noticed a drop of tear taking ground in the corner of his left eye. The youngster suddenly regretted his question.
When the old man spoke, his lips fluttered. “I have a reason for what I am doing.” He said. “I believe that when the bad stories are all consumed the good ones will surface. And then I can harvest them, unstopping. So I never stop creating new stories, because you never know when you step upon a priceless gem, for which you had spent a lifetime searching.” 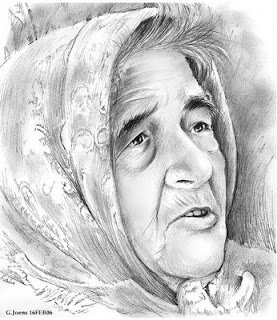 The young writer returned without a word more. He knew, absolutely, that he had found his path, this time not of death, but of an eternal life, full of possibilities.
The Days that are No More--6
- March 06, 2011

good one for every writer. i got a huge inspiration from this 1.

Beautiful story and so profound.