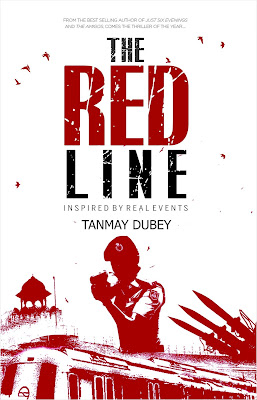 The opening line of The Art of the Novel a nonfiction discourse on the titular subject by Milan Kunder invokes the brilliant lecture given by Edmund Husserl in 1935 about a crisis that gripped what he identifies as "European Humanity". What Husserl identifies as the crisis is the perspectives adopted by his contemporaries. The perspective in question is that for the Europeans, everything, including the world as a whole is a question to be answered. This interrogative spirit is a historical reality also. Husserl addresses the great damage behind the motive of this interrogation-the passion to know.

The Red Line is a thriller which instils a passion to know in its readers. Following the controversial subject of India's involvement with East Pakistan's freedom struggle (Now Bangladesh), and the present crisis existing between the India and Pakistan, the novel connects a world-wide plot that attempts to demolish India's high powered defensive mechanisms. Set, part in the realist tradition and part in alignment with the super successful genre fiction style of thrillers, The Red Line is a remarkable achievement.

From the introduction to the story in the Prologue, the reader is being ushered into the world of espionage and international geopolitical intrigue, which settles down as the novel unravels in the neighbourhoods of Delhi. Two officers of Delhi Police, Hanumant Sastri and Azhar Ansari take up an investigation of a man mysteriously murdered in Delhi Metro.

Every character steps in with a bunch of surprising twists in the story. Along with suspense, the novel offers some high-octane action sequences that are written with expertise. With not a single passive scene, the novel offers a fast-paced reading and I finished it within my newly established "a book a week" regime. The Red Line weigh quite heavy but its typesetting is easily traceable in a moving bus or train.

The engaging plot of the novel inquires into the death of Rakesh Kumar, which turns out to be a rabbit hole into a horrifying cyber attack on India by a terrorist organisation. Through the suspense and thrill, however, one is given a glimpse into the family of Hanumant and Azhar. The moral dilemma faced by Hanumant, a failed police officer is at the core of this story. Hanumant Sastri is a man of his ideals and moral principles. However, we will see him face a moral tragedy. Through the narrative, we find out if he can regain his lost self-respect in front of his family. With Azhar, his colleague, he even traverses the dark and murky landscape of bribery and corruption, succumbing to the evils. This causes a painful rift between the two friends. Azhar even decides to get a transfer to work away from Hanumant because even he thinks that Hanumant's ideals are certainly impractical in the modern world.

A deeply moral and ethical tale, The Red Line constructs a perfect recipe for an intense example of storytelling. If this book becomes a Bollywood movie ever, I wish to see actor Sanjay Dutt play the role of the police officer, Hanumant Sastri and Arshad Varsi play Azhar Ansari.

Published by Inkstate, an arm of Leadstart Publishing Corporation, The Red Line has a glossy paperback cover. It is available in Rs 349 but great discounts shall be availed form online shipping sites like Amazon.

Author Tanmay Dubey is the bestselling author of Just Six Evenings (2015) and The Amigos (2017). He is a motivational speaker and lives in Gurgaon with his family. Contact: @Author_Tanmay (Twitter), @leotanmayd (Instagram).
- August 23, 2019