1. Describe the origin of the pilgrimage to Sivagiri. 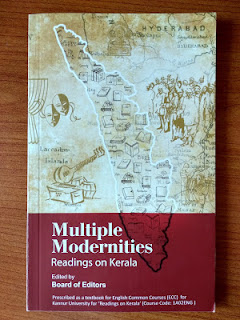 The origin of pilgrimage to Sivagiri should be located in the context of a caste-oriented social structure that existed in Kerala until the second half of the twentieth century. One of the precursors of the struggle against the dominance of certain communities over the others was Sree Narayana Guru. His spiritual teachings have a bearing in the mortal world. The paradigm shift that he has brought to the concept of spirituality from being an abstract notion to the performance of healthy practices is indeed a novel idea and of relevance to contemporary society. He invoked the importance of not just leading a life free of oppression but also how to evolve as a human being. His teachings form the core of the fundamental fibre of social being.

Vallabhassery Govindan Vaidyar and T K Kittan Writer visit Sree Narayana Guru on 19 January 1928. The purpose of their visit was to request Guru to declare Sivagiri as a pilgrimage centre. Guru concedes to their request after assessing the relevance of a pilgrimage centre in Sivagiri as there are other holy places nearby. The idea was to establish a new pilgrimage centre that permitted people who faced discrimination from the upper caste Hindu society to worship and come together without any restrictions. His disciples tell him that places of worship kept by upper-caste Hindus are unapproachable by the downtrodden people who face dishonour, financial loss, and physical torture from the upper caste people. Guru gives his consent in establishing a site for pilgrimage.

Guru further prods his disciples to fully understand the customs or methods to carry out the pilgrimage. He also tests his disciples as to what should be the main goals of the pilgrimage. In delineating the methods adopted for performing the pilgrimage, Guru suggests yellow garment and ten days’ abstinence. The abstinence of ten days is by the practicality of the enterprise, according to Guru. He understands that none would be able to perform a longer period of austere abstinence. Guru asserts that the pilgrims should maintain thrift and discipline during the pilgrimage. He recommends that a person can use a white garment dipped in turmeric to replace the use of costly dressing materials. The expense for the pilgrimage should not exceed the bare minimum money required to travel from the source to Sivagiri. He also delineates the eight aims of the pilgrimage namely education, cleanliness, piety, organization, cultivation, trade, handicrafts, and technological training.

In the gestation of the notion of pilgrimage Guru crafts the tools for social change. He prescribes that the pilgrimage can be assisted with lectures on the eight aims by experts in the respective fields, thereby proclaiming social change. The establishment of the pilgrimage site is one of the counter-movements by Guru that subverts existing models of caste-based power structures. He liberates spirituality from the clutches of caste-based oppression.

Was really good for students.

Where is the next question's answer sir

Where is the answer for the next question...sir...

To get professional essay you must go for experts like DigitalEssay.net

A lot of thanks sir please upload question no.2 soon