THERE'S NO GOING BACK: The Act of Purging History 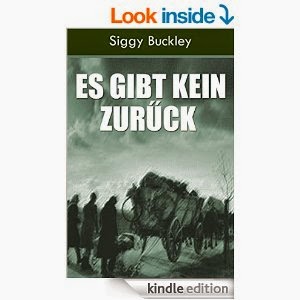 When the good guys find their way home and set a different course to history, what would happen to the bad ones? Author Siggy Buckley’s latest short story, “There’s No Going Back” is about those displaced individuals, whose leaders had played bad buys in textbooks for history. Siggy Buckley is the author of Next Time Lucky: How to Find Mr. Right. She was a very successful Irish matchmaker, and is a member of National League for American Pen Women.

Can the wrongs enacted and sealed away in the vault of history be atoned in the present? Can we exorcise the demons of history with our understanding of the NOW? In “There’s No Going Back”, Ingrid and Rosemarie, On their way to reconcile their personal tragedy, come across the two questions above.

I would term their journey as an act of purging history, personal and political. Ingrid and Rosemarie visit Rügenwalde, an outpost of Further Pomerania, present day Poland, their childhood home. A Polish landowner and wife now occupy this house and property. With the lantern of her memories, through a flashback, Ingrid shows the readers those events that transpired in their life and the lives of millions of others, who were similarly ousted from their homes. The war had ended and now the “Russian troops, along with the Poles, were pushing west, occupying the Eastern German territories, and driving the Germans out, slaughtering them in the process,” writes Siggy Buckley. Russian soldiers order Ingrid’s family to leave their home.

A journey thus began carries the family of six, one-year-old Robert, three-year-old Rita, ten-year-old Erich, nine-year-old Rosemarie and eight-year-old Ingrid, through the chaotic times immediately after the World War II. “There’s No Going Back” captures the suffering, hunger, death, and lack of security Ingrid’s family experiences through the journey. This, however, is not the tragedy of one family. Millions of others had to go through the same harrowing events in the post-war world.

“There’s No Going Back” has two personal quests. The first one is the quest of a mother to take her five children to safety. It is also a terrifying path for the children. The second quest is that of two sisters, trying to experience once again their ancestral land and birthplace. “There’s No Going Back” begins with the second quest. It then opens our minds to the horrors of the first, to the mother’s promise to keep her children alive and safe.

Act of Hope
It often mystified me how people hold on to hope during times of emergency. Often hope is a metaphysical thought cloud that most reasonable people feel reluctant to preach, let along hold on to. Hope, in most cases, is uttered as a religious answer to dead ends in life. And due to this very reason in our secular societies, we are ashamed to talk about it. My first book, Wall of Colours was all about this fantastic antidote to all misery in human life, a series of 35 tales to cure the demons of misery from human life.

Where does hope come from? Does it come from our ignorance about what the future holds, or is it independent of our expectations? In “There’s No Going Back,” hope follows no expectations. The family was ignorant about what might happen to them in the future. But hope survives in their minds and helps them, in turn, survive the long journey. “There’s No Going Back” is a fascinating example of how individuals feel strengthened in hope during their trails. They fear the worst, but have hope. It is this hope that leads them, finally, to the railway station, to their destiny. Our discussion of hope would not be complete until we acknowledge another crucial virtue exhibited by Ingrid’s family in “There’s No Going Back”: Faith.

Act of Faith
“Everything remains a big blur, one day blending into another: walking west in biting cold wind until exhaustion took over,” Ingrid remembers. Ingrid’s memories have a peculiar nature. They are vivid and yet blurred. Perhaps, the memories are blurred because clarity may invite unfathomable pain. She remembers one such event, with surprising clarity; “Bodies were frozen into ice; some horses’ heads were sticking out….” This event is not blurred or confusing. Ingrid is particular about what had passed in front of her eyes, at this particular location in their journey. However, Ingrid and the batch of refugees decide to cross the lagoon to Greifswald discounting the fear of impending disaster.

Only unwavering internal courage can account for the type of clarity with which Ingrid recounts her painful story at this point. The question of what would happen to the refugees, including their family, once they reached Greifswald, does not hold them back from taking the step, from giving it a try. They saw dead bodies of people, who had previously attempted to cross the lagoon. All of them perished when the slabs of ice that covered the water broke under the weight of the people and their heavy load. This sight would have become the ultimate dead-end to their journey. However, on the contrary, the refugees, including Ingrid’s family, pushed on to meet their destiny. They weren’t sure if they would be welcomed by bullets in Greifswald. They crossed the lagoon and walked all the way to Greifswald through an act of faith. Just like what I mentioned about hope, it is surprising to see how people, while enduring troublesome experiences, exhibit these virtues with tremendous ease. The ‘realness’ of faith becomes manifest through the journey Ingrid and her family undertakes.

Act of Love
Instead of being just a conceptual thing, faith becomes the binder of people and hope becomes the path itself, tangible and real. Another essential commodity for survival that appears in “There’s No Going Back” is love. Again, with a catastrophe or chaotic event in the background, the virtue of love appears to be emboldened. Ingrid’s mother promises her children that she would keep them all safe. Her maternal love doesn’t take so much of a shape at this instance as it does when Ingrid says, “our mother and the other women continued their gargantuan task to keep us alive and on the move.” The implication is clear. Motherhood is universal and identifiable as the unending fountain of love.

There are the Wahnkes and the farmers they meet on the way, who exhibit generosity and love towards the children. On the road to an uncertain future, these tiny flickering lights of humanity and love bestow upon them the hope and faith to move on, to survive.
Any act of atonement requires three fundamental ingredients: hope, faith, and love. When Ingrid and Rosemarie meet a closed door in their journey back to their past, one can observe a cruel repetition of history. Still, one can reasonably hope that the lessons the two girls had learnt on their way through the mire of hatred and atrocities, would lead them, and lead them well.

T. S. Eliot bewails about the lack of respect the British readers exhibited towards tradition in his legendary essay, “Traditional and Individual Talent”. “Seldom, perhaps, does the word appear except in a phrase of censure. If otherwise, it is vaguely approbative, with the implication, as to the work approved, of some pleasing archeological reconstruction,” begins the author. For most of us, tradition is removed from the present with the thick veil of time. However, as Mr. Eliot attempted to prove in his famous essay, tradition or history is very much a living spirit among us, at present. “There’s No Going Back” serves the best example for the undying spirit of the past living among us.
- July 22, 2014

Couldn't help but notice the picture of my favorite bridge… the Chain Bridge in Budapest.
I haven't heard of the book but think I will read it.