The stain from blood is not very easy to remove especially, by selling books. Do not doubt the sanity of this statement. This statement is completely part of my conscious thinking and understanding about Tony Blair’s new book. The sanity of the human state is not necessarily a self evaluation, but an identity, a label, by the society or a part of the space that one occupies in the society.


In a human life, sanity and insanity never juxtapose or lay side by side. There is therefore, no dividing line between both. There is only a battle, just like the one happened in Afghanistan. And then, there is only one result too, victory or failure—sanity or insanity. One conquers the other; ravishing, destroying and tearing apart the loser. But you or I will never realize what rules us; sanity or insanity. Yes, some one will shout at us from the corner of the street—there goes the mad one! Then in the darkness imposed by the momentary consciousness, we realize a faint glint: only those who are sane enough to understand that they are insane will survive.
The discrepancy in Tony Blair’s case had started with his decision to send the troops to the hell like place: Afghanistan. The publisher’s argument about the donation of money to Blair is that buyers of the book won’t feel bad even if they dislike Blair, to pay their money because the money is not going to Blair. After all, Blair is making some amendments for the suffering of the soldiers. But then, is it not he that sent those soldiers to meet their doom. His tears might be briny, but with the soldier’s sweat. And a crucial question to which none of the Western media or the critics keep any care to, is about the lives of the many a women and children perished in the war against terror.
A war cannot be fought in preserved environments. It is all destructive and ever threatening. However, the losses the war on Afghanistan cost were those exactly wanted by the anti-human forces like Osama Bin Laden—destruction, death, confusion. 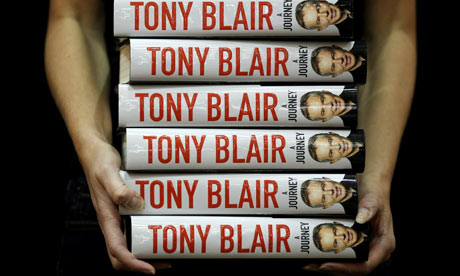 For you or me, it becomes an effort less short of impossible to maintain the state of sanity. But to what extent some one, calling us insane affects us? The threat in the situation lies in the fact that you and I are perfectly aware of our states of sanity. In a society that has gone mad, the only struggle, the only rebellion is to prove ourselves sane—something that you and me are forced to do. The multimillion-pact will no doubt continue the recent boom in publishing industry. And especially, Tony Blair’s book will provide us some of the great scenes from the world that tries to find its state of sanity.
- September 12, 2010