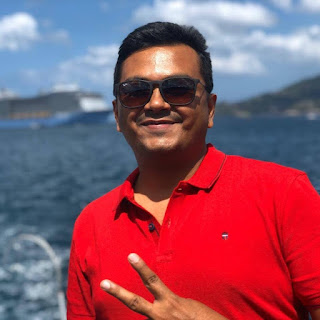 This is the first time in my career that I am reviewing a vlog, a Youtube vlog. I haven’t seen a written review of vlogs as a reader either. If cinema, music, and art can be reviewed, why can’t we review vlogs also? Several people might have a taste for words written on a page. More than that, a written review is a confirmation of the value of the product reviewed. More than a video response, a written response often shares several corresponding information in analytical documentation. Recently, a vlogging community was formed, with the coming together of many video content creators of Kerala. However, there has not been serious documentation of the video contents created in Kerala or in India in general. There is certainly a nuance yet to be explored in every video narrative. It is similar to literature, in that sense.

In today’s review, I would like to focus on the video released by the top lifestyle vlogger in Kerala, Mr Sujith Bhakthan and his vlog titled Tech Travel Eat. There is a reason why I give him the tag of the best lifestyle vlogger, upon which this review might shed light as it progresses. However, I would also like to make it clear that this is only the review of the particular video that was released on 27 December 2020, which was titled, “Endeavour Owners Meet-up & Treat”.

This video starts with a group of people posing for a wide-angle group-shot in front of several Ford Endeavour vehicles parked in a semi-circle. Soon, the shot shifts to the smiling charm of Sujith Bhakthan. To my surprise, Emil, his compatriot was also with him on the episode. His presence certainly brought back memories of the winter expedition the team had had with Ford Endeavour, the previous month. Later, we learn that Sujith Bhakthan and his wife Swetha were in Kochi, visiting a friend. The video on the previous day, which I watched quite curiously, thanks to the storytelling skill of this man, was about this visit.

This scene, doubtlessly, is the most important scene in the introductory session, as Sujith Bhakthan gives a preface to all the activities related to the meet up that was to happen later on the day. In a neat array, he elaborates on the proceedings- first, he would reach the dealer’s place in Kochi, from there as a convoy, the many Ford Endeavour vehicles present there would march to Grand Hayat Hotel and there they would conclude the event. For those who are interested in creating successful Youtube videos, this is a significant point to note. An introduction into what the remaining part of the video would bring would certainly show that you are in control of the entire situation. A seminal element of Sujith Bhakthan’s videos is the control and narration that he employs. He is a good storyteller and this storytelling skill is reflected throughout all his videos, especially, in the said episode.

One of the iconic elements in Sujith Bhaklthan’s videos is his humour. In the opening scenes too, he indulges in sarcastic humour targeting the dirty ditches of Kochi. We learn through the scene with Swetha that Sujith would leave her with her elder sister who lives in Kochi and then he would proceed to Kairali Ford, the dealer of Ford vehicles in Kochi, for the meet up of the owners of Ford Endeavour.

Within three minutes of the starting of the video, Sujith Bhakthan takes us on board a RORO, cargo ships designed to carry wheeled cargo across large water bodies, between two beaches or bays, here from Fort Kochi to Vypin And he travels in his brand new, red-black dual-tone Tata Harrier SUV. Once on board the RORO, he steps out of his vehicle and shoots the scene, following his vocation dutifully. Watching the RORO ride, as an audience, it was a real feeling. I felt like I was on board that RORO, especially, as a person from the North of Kerala, where water body transport isn’t much common.

Once Sujith Bhakthan reaches Kairali Ford, we learn that Harees Ameerali (aka Harees Ikka), one of the companions who accompanied Sujith and Emil along with Hani Musthafa on the Winter Expedition, was also with them. Later, as they reached the dealer’s office, where the first event was to take place, the many owners of the vehicle were assembled to honour the Tech Travel Eat team.

“It’s not a big deal,” said Emil George, who spoke on the occasion, hinting at the recent controversy with MG Gloster. The owners of Ford Endeavour interacted in the gathering, narrating their own experiences with the vehicle. In this interactive session, we also learn some subtle controversies concerning the Winter Expedition and the vehicle, Ford Endeavour, which was shared by Mr Shinto, the manager of the firm. We learn also that Harees Ameerali, Emil and Sujith had already planned to purchase a Ford Endeavour vehicle.

The vlog proceeds with the vehicles moving through the city of Kochi in a convoy and concludes with a dining and photo session. After that session that I mentioned, where the interaction with Ford owners was the event, my mind mostly contemplated the words of Emil, in relation to one of their recent controversies regarding the MG Gloster, and the subtle nuances left by Mr Shinto, the manager of Kairali Ford. One may wonder if both these covert attacks on Sujith Bhakthan were connected. It seems like someone is guilty of schadenfreude.

The vlog was charged with positivity, as most of the vlogs from Tech Travel Eat. One may feel wanting for an experience with Ford Endeavour, which is a leviathan of an SUV, after watching this video. Those twenty-three minutes were well spent and they inspired me to hope and expect for more from life.

The purpose of a good review is not to give stars or to count some advantages over the other, especially if the review is in written form. The vlog stands for itself as a testimony for all the facts that it shares.

Dressed in semi-formal attire, Sujith Bkahthan and Emil stole the show accompanied by Harees Ameerali, another eminent vlogger, and filled this episode with memories of their exciting winter expedition. Ironically, it was Harees Ameerali who pointed out that they were going to relive the memories of the expedition. Intermingled with memories, joy, pride, hope, and sincerity, this video was certainly one of the memorable experiences shared by Sujith Bhakthan.