The vlog is only fourteen minutes long, and after about six hours of posting, the video had gathered just above 30,000 views. This is a slow beginning for a vlog episode featuring one of the oldest, and vibrant Youtubers in Kerala, Annamma Pulivelil, who hails from Nadavayal in Wayanad district, Kerala. Her channel Annamma Chedathi Special is one of the fastest-growing Youtube channels and is managed by another renowned Youtuber named Sachin, who owns the channel Come on Everybody. The usual treat of Annamma chedathi special is cooking videos reconstructing many traditional delicacies of Kerala. The video released on 28 December 2020 was titled “Ammachi returns from Kottayam” and features an oral summing up of the vastly successful Kottayam journey of Annamma chedathi.

Since the Kottayam trip started, it is Sachin who appears in the introductory scenes of the videos, a shift from the regular anchors of the show, Babu, Annamma’s son and Annamma herself. For those audiences who have developed a liking for the show in which the septuagenarian cooks her expert recipes and her son Babu acts as a helper and assistant chef, this shift in the new intros with Sachin may appear to border disappointment. This is because the audiences have loved not just the cooking but also the way of speaking and narrative skills of Annamma chedathi and Babu chettan. The new viewers might not give the introductions by Sachin a second thought. Often, it felt that Babu chettan supplements the cooking process wherever Annamma chedathi lapses in her alert, due to her age. And his presence imparts a pleasant effect to the show.

Sachin, though being the funniest anchor in visual media right now, who with his genuinely innocent and quirky humour induces laughter while grasping the attention of the audience, reneges the opportunity to be in his true self and appears quite dull these days when he appears in Annamma chedathi Special. No immediacy rendered his presence inevitable in Annamma Chedathi Special vlogs, in front of the camera. His work best reflects his presence when he is behind the camera and his sweet cameos at the end of the cookery show as a taster of the delicacies cooked by Annamma chedathi.

After that introductory scene, Annamma chedathi and her son Babu recount their many experiences during the visit to Kottayam. They also exhibited some of the gifts they received from well-wishers and fans. Annamma chedathi and Babu chettan sit on the steps of the verandah of their house. What is noticeable is the pleasant and joyous smile on the face of the septuagenarian. Annamma chedathi, who is in her seventies looks a bit tired from her long trip to Kottayam, as it’s a long journey from Nadavayal in Wayanad to Kottayam. However, it does not seem to tire her spirit and good humour. A very touching reference came up when they spoke about Pazhayidam Thirumeni and his sweet pudding, the payasam, that he made for Annamma chedathi during the visit to his house. The episode with Pazhayidam was certainly a delight to watch, one of the successful vlogs made during the Kottayam visit. The other reference that may strike the audience is the reference to a name, Rebecca. Both Annamma chedathi and Babu chettan were excitedly narrating the experience of their meeting with Rebecca and how she painstakingly drew their portraits on the surface of a bottle. The one disappointment with this event with Rebecca was that the team did not show her or the meeting with her during the many videos from Kottayam trip. Had they shown this wonderfully coincidental meeting, it would certainly have been another unforgettable experience for viewers who would love to take in every bit of Annamma chedathi’s life story.

Any viewer in the habit of going through the “comments” section of the vlog, would certainly notice a comment from one viewer that this video only features the experiences of the Kottayam journey and no cooking. The commentator had also asserted that she would be waiting specifically for more cooking videos. Combined with this prompting comment, the first mention in this article about the low number of initial views for the video could only hint in one direction, that the niche audiences are not much happy with a video in which Annamma chedathi recounts her experiences of a recent long journey and not cooks. Being a vlog that focuses mostly on cooking, the niche into which it belongs, it always tags the expectations of the audiences along. It will be difficult for vloggers in this situation to try something “else” without offending a large demographic of their audiences. There are two ways to incorporate such a scenario into this vlog. The first one is that Annamma chedathi can make a new food item named after her Kottayam journey. The second one is to play the scenes of the narration intermittently while preparing a salubrious dish. This would have won the audience who are both within the niche and outside.

One lesson that the new Youtubers can take home from this study is that to garner a quick growth in the number of views, one must cater efficiently to a niche audience. This may doubtlessly entail a limitation since the content could only be of a certain “type”. However, if one is creative enough, the same niche could be used to tell various narratives in multiple ways. For example, the audience for this blog is largely people who love books and reading, and also students who are looking for essays and answers for their various English courses. This includes an international audience. So I am stuck in this niche, in one way. Then I thought about starting a Youtube channel and doing something similar there, except by using videos. However, upon further investigation, I realized that my niche is even precisely linked with the written word since I am an author. Those are culpable of no error who start a Youtube channel in a different niche, catering to a different set of audiences. But it is never certain that they would want to read my books. I sincerely wanted to do an exploration of the Youtube vlogs, specially made in Kerala, because they have such divergent and vibrant content. So I decided to stick with my existing niche and write about Malayalam Youtube channels. This way, I will be able to incorporate a variety of new content into the existing niche where I operate usually. Therefore, finding a niche, “a position or role, taken by a kind of living thing within its community”, is important.

The episode of our consideration is clearly an ‘out of the niche’ experience, a style Annamma chedathi never shied away from. Even during the Kottayam visits, she had done videos on her visits to her childhood school, the church where she was baptised, her old paddy fields, where she used to find menial labour as a child during the economically hard days in the past. The cold response to a storytelling video after the Kottayam visits certainly offers an important lesson not just for the owners of the vlog, but also for every audience involved. This lesson is connected with the act of narration itself. Every essay, story, or article should carry an introduction, middle part and conclusion. Annamma Chedathi Special capitalises, like most successful vlogs in Malayalam, on storytelling techniques. Behind every good video, there is good storytelling. Annamma chedathi recounting her stories from Kottayam is a fitting conclusion to a successful trip. In that sense, it perfectly blends with the spirit of the earlier videos of the trip.

In another episode, we will review one of Come on Everybody's videos and see what makes them a good vlog to watch out for and as I mentioned, how Sachin became the funniest anchor in Kerala. 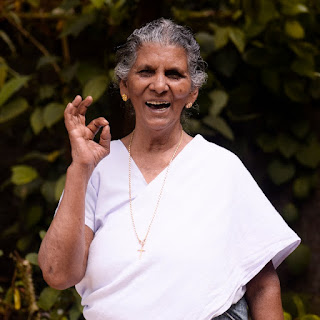