The Assassinations: A Novel of 1984 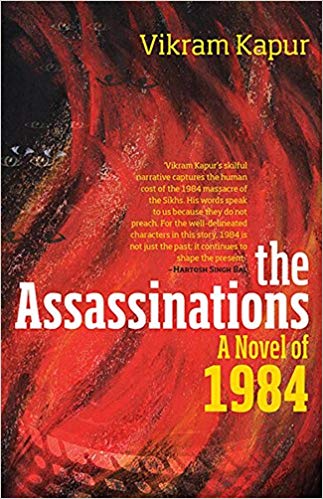 Recently, in Indian literature in English, the riots of 1984 in which the Sikh community was targeted, found its conspicuous expressions. A set of books namely, The Assassinations: A Novel of 1984 by Vikram Kapur, 1984: India’s Guilty Secret by Pav Singh, Amritsar: Mrs Gandhi's Last Battle by Mark Tully, Operation Blue Star: The True Story by K. S. Brar, The Punjab Story by Amarjit Kaur et al., When a Tree Shook Delhi by Manoj Mitta, I Accuse... :The Anti-Sikh Violence of 1984 by Jarnail Singh, and 1984: The Anti-Sikh Riots and After by Sanjay Suri venture to foreground the massacre of Sikhs, the pain of one’s own home territory becoming hostile, the transformation of trust into bigotry, and the political correctness of all that which caused these riots. These books become the shining mirror held against the memory of the fratricides. One may see every shade of the events that took place before and soon after Mrs Indira Gandhi’s death.

Vikram Kapur’s book, The Assassinations is a novel. It’s short in its length. Clothed in a crimson cover, the book invites readers to face a haunting series of unsettling events. Deepa and Prem are about to cross the most important threshold of their life. They start dreaming and planning their beautiful life. Their marriage is nearing. Deepa’s mother, Savitri is in frenzy. She wants everything to be perfect on the wedding day of her daughter. But life has something else to offer them. Through the story of two families, the novel unravels the harrowing experiences of the Sikh massacres that occurred in 1984, after the murder of the prime minister, Ms Indira Gandhi.

The news of the death of Indira Gandhi, the prime minister shakes the world they inhabit. The cosy lives of the characters we meet are shattered without prior notice. The novel has four parts: “Delhi, 31st October 1984”, “Before”, “After”, and “Delhi 2004”.

Amarjeet and Kishneet, parents of Prem are also excited about their son’s marriage with a Hindu girl, Deepa. Being a Sikh family has not affected them in any way in making that decision. However, when the darkness of bigotry changes the society they inhabit, even their family has to make decisions they never thought they had to make.

On the day of the assassination of the prime minister, (India’s first female prime minister), Prem visits one of his Muslim friends who is new to the city of Delhi. While Prem is at the house of Imran, the news of the assassination of the prime minister broke. The act was committed by one of her bodyguards who happened to be a Sikh. This was in retaliation of her decision to raid the Golden Temple of Amritsar. Prem could see chaos brooding in the neighbourhood. As he was about to leave, his car was stopped by some goons. He was dragged out of his car and beaten up. This episode is at the centre of the novel and serves the purpose of heightening the tension in the story.

The death of Indira Gandhi, the prime minister, was a historic event. This event was connected to a series of events that played out earlier in the history of this nation. The raid of the Golden Temple was an attempt to subdue the Sikh-terrorists who were using the religious place, the holy shrine of the Sikhs, as their ground of operation. However, the operation had wounded the spiritual sensibilities of the Sikh community. The feelings of intolerance had developed like a storm gathering.

Both the older male characters in the novel, Amarjeet, Prem’s father and Jaswant, Deepa’s father had undergone the harrowing experiences of India’s partition. For them, the riots seemed to eclipse the present and foreground the past all over again. Here is a strand of thought that passed through Amarjeet’s mind: “Now, in the blink of an eye, he had been flung back thirty-seven years, once again contemplating flight, as the city that had given him refuge shrieked for his blood” (129). Thirty-seven years before, Amarjeet had reached Delhi as a refugee from of partition. From there he had worked his way up the ladder in the society to become a respectable doctor. However, his elite status in the society hadn’t been able to save his son, Prem from being beaten up near Irfan’s house.

The stream of consciousness technique is used in many areas to narrate the feelings and thought processes of characters with a great impact. The storytelling of Vikram Kapur is simple, direct in style, and lucid in language. Vikram Kapur has authored two novels previously namely, Time is a Fire and The Wages of Life. He works as an associate professor at Shiv Nadar University.

The Assassinations stands as a novel that clears the mist over one of the darkest episodes of Indian politics. There is no question that the novel will haunt us for days and months after reading it, with its thought-provoking narrative style and compelling events of human transformation.  Published by Speaking Tiger Publishing, this book is priced in MRP INR 299. The design of the book is ideal for comfortable reading experience. The size of the book and its weight stands out in support. The font size is large and therefore The Assassinations could be read while on train or bus, and/or in bus stations or railway stations as well as in your libraries.

The questions raised by this book will surely raise your sensibilities about inter-religious interactions in India. The moral rights of the author are asserted in the copyright page. Therefore, any attempt to make a film or a screenplay out of this book will have to go through the author’s consent in all matters regarding creative freedom of the other party. In other words, no tampering of the content will be allowed, once the moral right of the author is asserted. Indeed, this novel requires such careful handling of subject matter. The tone of the story as well as its focus is fine-tuned to regulate the expressions of the lessons we learned as a nation from the bad episode of our religious bigotry. Vikram Kapur is an author one must watch for. He is surely the torch bearer of Indian fiction in English, enlightening the path further down the road shown to us by the likes of Ruskin Bond, R K Narayan, and Salman Rushdie.

Usually, I never comment on blogs but your article is so convincing that I never stop myself to say something about it. You’re doing a great job Man. Best article I have ever read

Hi Guys! This is me: Naincy kumari and I'm once more present with the latest information in connection with your deep interest in call girls. As always I've brought new team of teenager call girls ready to satiate your hunger of female companionship. Just click the links for guidance.

Hi Guys! This is me: Archana kumari and I'm once more present with the latest information in connection with your deep interest in call girls. As always I've brought new team of teenager call girls ready to satiate your hunger of female companionship. Just click the links for guidance.

When you travel to Kolkata you will never truly be alone when you pick up one of the amazing escorts in Kolkata. Your nights here will be filled with passion and desire, and all sorts of sexual fun. Whether you are there for vacation or for business, Kolkata has plenty to offer you. Why not kick back a little and find a Kolkata escort service to provide you with a beauty that can really help you relax.
kolkata escorts

My name is Neha Gupta. I run my independent Mumbai Escorts Service. I am an independent Mumbai escort girl. My service charge is low according the market price. My service is super, because I know very well the personal need of my each customer. I am comfortable to provide my Mumbai Escorts Service at your home or in Hotel. 24X7 I am available. Visit- http://www.nehagupta.biz/ Call- +91 9OO4458359
Visit the Links Below and Have a Look At My Various Mumbai Escort Services-

I Saw Your Website Carefully. Thanks For Create Such Kind Of Informative Website. Your All Content Is Relevant To Your Subject. I Say Keep It Continue, Because Your Website And Subject Is Meaningful For The Users. I Have Recommended Your Website With My Friends Also. I Am Ritu Sharma. I Am An Independent Mumbai Escort Girl. I Deal In Mumbai Escorts service. I Am Very Hot And Sexy. Being A Mumbai Escort Girl I Have Five Years’ Experience. That’s Why I Understand The Each Personal Needs Of My Every Client. My Service Charge Is Low And Service Is Super. You Can Avail My VIP Mumbai Escorts Service At Your Home Or In Hotel. I Am Comfortable To Provide Mumbai Escorts Service In Local And Outside Also. Visit www.escortservicemumbai.net Call +91- 9OO4OO9481
Visit The Links Below And Have A Look At My Various Mumbai Escort Services-
Mumbai Escorts
Mumbai Call Girls
Mumbai Escorts In Vile
Parle
Bandra Escorts
Juhu Escorts
Andheri Escorts

My Name Is Priya Singh. I Run My Own Mumbai Escorts Service. I Am An Independent Mumbai Escort Girl. I Am Beautiful And Hot. My Service Charge Is Low And Service Is Super. Being Professional I Have Seven Years’ Experience As An Escort Girl. So I Understand And Feel The Real Needs And Requirement Of My Each Client. You Can Taste Me Any Time. According The Convenience You Can Avail My VIP Escort Service At Your Home Or In Hotel Also. To Book My VIP Mumbai Escort Service Call +91 9987215552. Visit http://www.escortagencyinmumbai.com/

If you want to share your Reviews, Feedback, and Complaints about Agarwal Packers and Movers then visit Gile Shikwe and Phark Padta Hai websites.

Check out these courses and enroll for it now

My name is Arpita Jain. I run my independent Mumbai Escorts Service. I am an independent Mumbai escort girl. My service charge is low according the current market price. My service is super, because I know very well the personal requirement of my each customer. I am comfortable to provide my Mumbai Escorts Service at your home or in Hotel. Visit- http://www.arpitajain.org/ Call- +91 9OO4458359
Visit The Links Below And Have A Look At My Various Mumbai Escort Services-


There are many call girls service provider in Chennai, but they don’t provide such kid of booking facilities as we provide to our customer with full security for their privacy.
Chennai Escorts