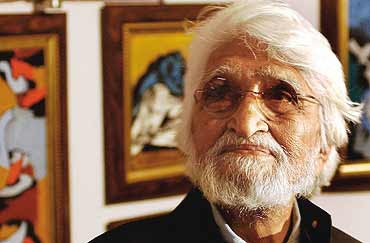 M. F Hussain, the painting prodigy passed away today living in exile. There was obviously nothing more to expect, no return to mother country or a transnational relation with the nation. The exile was an infinitely powerful prison where, unlike Czech novelist Milan Kundera, who celebrates his exile, Hussain suffered his homesickness, and the desire to return to the beauty of his artistic roots. It is hardly deniable that Hussain was a victim of the Indian cultural totalitarianism, due to portraying the Hindu deities in nude.
News reports say that “he was admitted only two days ago for fluid retention in his lungs, and but had otherwise been “in fairly good health".” (Yahoo.com:9/6/2011) He was 95 and according to his friends, he was too eager to make a return trip to . Hussain’s exile was a result of his paintings released in February 2006, which were nude portraits of Hindu gods and goddesses. In stripping its mask off the democratic promises of freedom of expression and an ‘endlessly welcoming culture’ certain religio-political groups had declared M.F. Hussain, a traitor. Their thirst for his blood had resulted in his exile.
At this moment, when nature had interfered into a human life and death has taken the artist into a world entirely out of the human-reality, a whole nation is crushed under the burden of guilt. And all is due to the Hindu radicals, the religious power that constantly interferes with the national policies and political scene reiterating the story of an age old nation where every one was born as a Hindu.
May his soul rest in peace.
The Indian Commentator
- June 09, 2011

He was also famous in The Netherlands
We called him also
The Picasso from India !!!
His work was wonderful.
He was a GREAT artist.