ENDURER: A RAPE STORY by Kapil Raj- A Search for Meaning while Enduring a Trauma 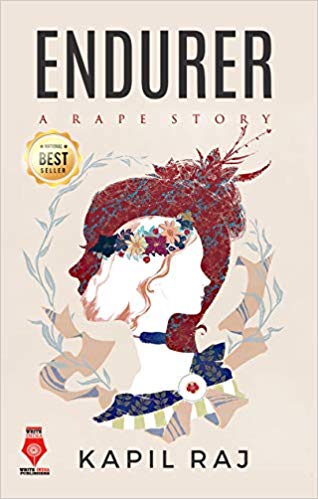 In a place called Munirka, located in the South Delhi area, several men brutally raped a young girl. Among the assailants (visible, invisible, and symbolic), the court convicted four. Those four were directly involved in the case. The Indian visual media covered this incident with all its might. The print news media also supported the cause of the young girl. They called her Nirbhaya, the one without fear. The date of the incident was on 16 December 2012.

A documentary titled India's Daughter came out in 2015. Leslee Udwin directed it. In 2018, another documentary, directed by Bidisha Adhikari, Kanchan Adhikari, and Payal Kaashyap released.

Although the visual media and print news media keenly followed the incident and its aftermath, the realm of literature stayed mostly incapable of giving expression to the horror. Love stories, one after the other, filled bookshelves of readers across India.

In 2018, Write India Publishers takes up a book proposal. Kapil Ray was the author of the book. Endurer: A Rape Story was the title of the book. The term "endurer" indicates a person who endures. In Shakespeare, one may find characters that appear in the title of the work itself, like Macbeth or Othello. In Kapil Raj, the endurer is Palak.

Palak, Tanya, Arav, Sam, Jahan, Uday, Rohin and Ankita are part of the story. The narrator of the tale is Palak and therefore the horrors that envelop her body, mind, and spirit appear deeply engraved in the words we read.

The boundary between right and wrong, the subjective veil between our deepest fears and the eternal saving dilutes for a moment. Palak finds herself helpless after watching a video that plays her hellish moment of mistake. She realizes that she was raped only after the incident was over and after her drug-induced sleep. She sees that it was Rohin, one of the friends of Uday.

I found the language of the book full of humour and wit, a rare quality in writers in Indian writing in English. Palak struggles with her hallucinations. Her reality is not defined by her own strength. Her journey is a search for the meaning of life. "If your life does not mean anything to you, give it to the ones who need it," Palak realizes.

Kapil Raj is based in New Delhi, India. Endurer is his first novel. His writing shows elements of philosophy and an understanding of the human mind. Carpe diem is the ideology of the lives lead by Palak and friends. Post the turning point in the story, Palak goes through a multi-faceted understanding of the pain that she goes through. For Palak, suffering trauma is not just a one-dimensional event. She experiences the trauma on many levels and forces her to seek the true meaning of her life. This may also suggest a philosophy of the author that only those who are ready to open up and immerse themselves completely in life can survive it too.

Endurer can be addressed as a survival story. It's also an existentialist investigation into the layers of meaning one has to unravel while enduring a traumatic incident. The cover of the book is well designed and any book collection should have a copy of this book just for the cover design. The material used for the cover is also unique in comparison. It's a matt finish, yet with a heavy coating of plastic.


Get your copy at a discount price: