Bestselling author of Private India, Krishna Key and Chnakya’s Chant, Ashwin Sanghi had recently complemented one of my book reviews.

Replied Ashwin Sanghi to my book-review tweet that involved his latest thriller, Private India, in collaboration with the American Bestselling author James Patterson. This book review has been one of the top discussions in Linkedin too. 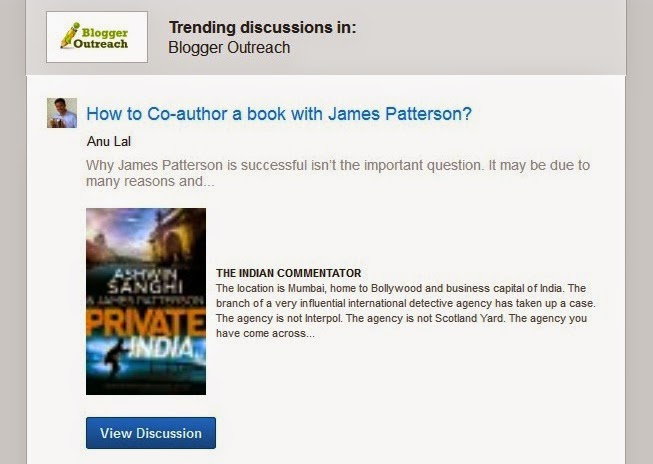 Private India is the first novel co-authored by Ashwin Sanghi. His previous three novels were written solo and were sold in large numbers in the Indian-English fiction market. Ashwin Sanghi is acclaimed to be one of the fastest selling authors in India. In the post-Chetan Bhagat era, only a few writers made authentic records as successful authors in English, although the market is teeming with English books by Indian authors. Ashwin Sanghi’s name appears among the very few successful writers.

Indian writings in English had always been an academic business, ever since that book by Rushdie that won him a Booker. Many Indian authors brought home the Booker Prize from that day onwards. But a real bestseller was born in India with the arrival of an investment banker on the page. He wrote a new chapter in selling books and writing stories that catch the minds of non-academic readers.

Chetan Bhagat books were sold like hot snacks in a wayside eatery during evenings. This made English books in India appealing. And this was crucial, because in India, a number of languages are spoken and written. With the new wave of popularity enjoyed by English books written by Indian authors, a new era was born. Indian English fiction and Indian English writing in general were thus inaugurated in the public sphere. People became more open to books written in English by Indian authors.

Although several writers attempted to break into the contemporary romance genre, success came only to some of those books. One writer took a different route from them all. He took to historical fiction, the same genre that Salman Rushdie, Amitav Ghosh and others have kept solely academic. This writer’s creative voice wasn’t so elitist, like his predecessors. He wrote books that were modeled closely on the American author Dan Brown’s bestsellers.

The result of this non-academic reversal in writing was the success of his three books, The Rozabal Line, Chanakya's Chant and The Krishna Key. All three books (not accidently), were modeled on Dan Brown’s narrative style. Although there are criticisms that these books, as many others, were nothing else but low quality literary misadventures, the bright side is quite luring.

The increased interest in English books written by Indian authors in India has given many publishing giants a new hope to sustain their businesses. Many of them have already established their permanent domains in the Indian market. The recent success of You Should Know How I Feel…, a collection of contemporary romance, inaugurated the arrival of the publishing and retailer giant Amazon in India. You Should Know How I Feel… is published by BW Publishing, an India-based publisher, in collaboration with Amazon’s print-on-demand company Createspace.

Trough Ashwin Sanghi’s successful collaboration with James Patterson, the NY Times Bestselling author, Private India created a new chapter of thrillers in India. The lukewarm and tiring panorama of thrillers written by Indian authors has taken a step backward with the publication of this new book.

Ashwin Sanghi’s contributions in Private India seem slender, within the mythical motifs that appear (sometimes, with no purpose other than to show his mythological awareness) in the book. Private India follows a typical James Patterson plot and story structure. Short chapters, unexpected acts of crime and petty homicide fetish stand out as original Patterson techniques. They appear in Private India too, in wholesale. Perhaps, this is what happens when one co-authors with another successful author, whose success is relatively more glossy that yours.

He is my favorite author and very good person too. I liked almost all his book but my favorite book is Half Girlfriend.