The Days that are No More--1 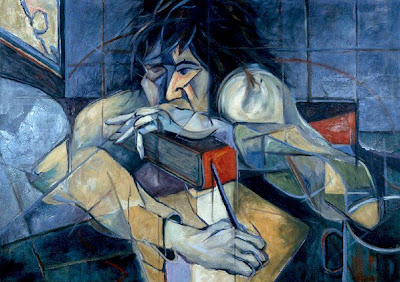 This is the story of a poet, who on a fine morning finds his muse eloped with a Misty Confusion. As a result he succumbs to an unimaginable stress and pressures himself to think the whole need to continue his life.

It was a time when his country was ruled by the British, and it was his ‘duty’ every Sunday evening to meet the assemblage in the General’s office to appease the officers with the magic of his poetry. There was even a saying about him that without listening to his poetry, the whole of the army base would perish in the crudeness of the reality and it was his poems that kept them alive.

In return the British had a pact with the poet. He was asked to attend the Sunday evening grand get-together with his poems and entertain the officers present; failing to achieve which he would lose his claim upon his own life.
He was more afraid of a life that he would be living without his muse, which was a part of his soul, his only intention to prolong a lonely life, than death. Anyway, he decided to meet the gathering, and gathered some of the old poems he had written. He went through them roughly. They were five. After hovering through them, he found it hard not to re-read them, so he read them all again, carefully; then dissatisfied, he perused them once again and each time something shocked him about the poems—they were the worst of all he could ever had imagined.
The poems in his hand included three of those, which he thought were his best. But the concurrent development was more than what he could expect from the best works of his. He was breaking down. There was nothing that could hold him together, not even the desire to live. He put the poems in a bag and started off in the way of the British General’s Office, this time with certain indifference and perhaps a deep desire to be the silent victim of the English Generals’ wrath, and die, for destroying their evening with those worthless pieces of paper.
He reached the General’s office. There was a huge assemblage waiting for the poet, an honour no one among his natives shared. But he felt less embarrassed that day contrary to what he felt during all his usual visits. He started reading his poems, sure that they will not help prolonging his life any more than he desired. There was no need for this life, which is locked inside an eternal prison called—the absence of his muse.
He finished reading his poems. There was as long silence; a pause, which was the certainty that something bad was going to happen. The general stood up. He joined his hands in a clap. It was followed by another, then another, and soon the whole event was transformed into a harmony that savoured the clap sounds. It was as if the whole air was going to burst out with excitement. The poet stood aghast. He tried hard to get an idea of what was happening. There was not a single clue. He was sure of total lost. He stood indifferent.
The general approached him. He took out a wallet from his pocket. That was money. The story ends here. The General’s gesture and the excitement of the crowd after listening to the poems were indicative of how successful the event for the poet was. The General rewarded the poet with money, and apologized for not being able to properly reward the poet for his fascinating works of art along with an honorary place near his seat in the grand banquet that followed the event.
The poet was under writer’s block. This is exactly what happens when you are in a block, you feel your muse, or your creative angel is gone and will never come back. You feel yourself trapped more when it seems impossible to identify yourself with the past that you lived and cherished as something brighter. But as the poet in the story sometimes a miracle happens and it rescues you from the verge of self destruction.

I too am awarded recently, and this story, though is a part of the new series titled: The Days that are No More, is a gift to Neeha who awarded me with The Stylish Blogger award, mostly to make her and others understand how I felt myself undeserving for any such honours at the moment. May be due to the writer’s block. That was the reason why I delayed this post this much. Thank you Neeha.  There are certain conditions that any of the bloggers who are awarded with this particular award are supposed to follow. The directions are available in Neeha’s Blog. I am planning to make another post following the directions and for announcing a winner.
- February 07, 2011

Thank you so much Anya. Glad that you enjoyed.