THE CORD BY SREDHANEA RAMKRISHNAN: A Review 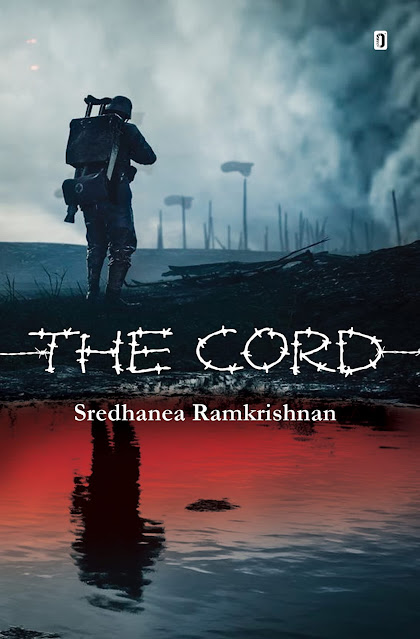 Often we ponder the causes that drive a writer to give shape to his thoughts in the form of literary art. We seldom consider the reasons that motivate us readers towards literature and art in general. The laymen take it for granted. Is art such a social or cultural product that we should take for granted as a side-effect of human existence? When the IS demolished the statues of Bamiyan, the underlying message was clear. Art is not just a natural byproduct of humans interacting with humans or nature or supernatural forces. It takes a conscious effort, a step towards the unknown, to entrench oneself or the culture in the world of art. Art, like science and philosophy, takes the torch of investigation forward. Its most important function. Literature, the art of words, is our concern here. “The novel is a meditation on existence as seen through the medium of imaginary characters,” suggests Milan Kundera in his Art of the Novel.

Certain novels draw our attention not just by their subject matter but also by the treatment of the subject. The craft of novel writing involves a complex amalgamation of the subject matter with the language, metaphors, metaphysics, thoughts, philosophy, plot and story. The Cord is one such novel. Commendable in its shortness and economy of style, The Cord hits all the right notes of emotions, thrill, drama, and suspense through the span of the narrative.

The Cord is a brutal story of a father and son who are taken apart by the currents of history. Both of them carve their life out in the armed forces. They settle down in their respective geopolitical sides: one in Pakistan and the other, in India. The novel deals with one of the most complex and difficult existential issues: life in the armed forces. Usually, such narratives that include armed forces portray their valour, glory, and patriotism. There are certain classic exceptions though, such as Bernard Shaw’s Arms and the Man, a play that made the Modernist mind question its loyalties, and Hemingway’s Farewell to Arms, which enabled us to let go of the burden of putting ourselves to the test of the grand virtues borne by the soldiers.

Sredhanea Ramkrishnan puts us to the test of experiencing the agony of a soldier’s moral crisis. Set in the immediate backdrop of India’s partition, The Cord masterfully captures the uncertainties of the era. Historical figures such as Cyril Radcliffe and Christopher Beaumont are behind the officiation of the partition of the two nations. They appear on the pages and shock us with the gruesomeness of reality. Azad leaves his family. They are migrating to Pakistan due to the newly revived religious sentiments of Major Ashraf Ullah, the father of Azad. The reason for the absconding of Azad is at first unclear to his family. His father, mother and younger sister were left behind in Pakistan, and Azad finds in India his new home.

The novel moves with a tightly woven plot and strong character moments. As the story moves towards its climax, the readers are given a glimpse into the function of the novel: to explore an existential question. The question the novel explores is perhaps as old as humanity’s entire life span but seldom explored. What truly motivates a soldier, the love for one’s family or the love for the nation?

The Cord captures many emotions, ideas, and complex events with clarity. The economy of words is a surprising aspect of the novel that may serve as a good lesson for aspiring writers. A compatriot of Sredhanea, I remember wondering while reading The Cord on the author’s gift for writing a complex narrative with such a small number of words. Every word counts in this novel, and every pause matters. The visual aspect of writing is yet another takeaway. The writer shows the story rather than telling it. The novel in the Indian English writing tradition often relies on the expositional narrative, which strikes mostly an authorial monologue. This is absent if not mostly silenced in Sredhanea’s work.

The novel also breaks free from the confinement within the historical territory. The characters that are placed in the complex historical situation of the partition are players in the ensuing fictional narrative. Thus, The Cord gracefully nestles itself within the niche of historical fiction, still offering the flight of imagination of a fictional narrative for the readers. The Cord would certainly provoke thoughts. Those open-ended scenes, matters unsaid, would entice a reader to visualise the remaining part in his or her mind providing an ideal ground to take part in the creative process.

The Cord is Sredhanea Ramkrishnan’s debut novel. It proves her to be a unique voice among Indian English Writers. Published by Zero Degree publishing, The Cord comes in a cover designed by Vijayan. The cover image does justice to the themes and concerns of the book. Some chapters are epistolary, designed as the inland letter, an old letter-writing sheet usually bought in post offices in India. In the present day, when letter writing has mostly undergone an advanced makeover in the digital form, the inland is no longer seen. The book is priced at Rupees 290 only and is available for purchase on Amazon.

In Jayanthi Sankar’s Foreword to The Cord, she speaks about the depleting severity of borders in the present world. Borders in the past were more poignant and threatening. Distances and physical separation in today’s world are overcome by the various conveniences invented by digital technology. Conceiving borders with its gruesomeness is perhaps more necessary today than it was in the past. This helps one to learn why some of us made the decisions they made in the pages of history- personal or national. This may be the reason a reader finds The Cord and engages oneself in the pages of this novel.

Pharmacy Store Online Is Here For You With Different Disorders Medications. We Are Here To Provide You The Best Online Medications With 20% Discount. Just Click On Links Below.


Well Done with the blog
Check Mine
Fiji flights

I think this is an informative post and it is very useful and knowledgeable. therefore, I would like to thank you for the efforts you have made in writing this article.

Hi, Whoa... Nice and great info information regarding Anxiety. ...I would love to read such informative blogs. Thanks by the way!
The psychological condition is known as dysthymia or double depression. This powerful, ominous feeling—which has been called a "veil of despair"—occurs virtually daily and occasionally lasts for years. People can get rid of double depression with the help of various treatments. One of India's top and most reputable centres for the treatment of drug and alcohol addiction is SimranShri Rehab, Nasha Mukti Kendra delhi.

Hi, How are you.
Thank you so much for your wonderful message. If there is something in my life that I believe is really important and that I should grasp, I always attempt to comprehend it, and I saw your post and really enjoyed it.
Know The Most Effective Treatment For Anxiety Disorders
Find all about anxiety disorder and its treatment. This includes all anxiety treatments without medication, symptoms, duration and diagnosis.
For more follow Simranshri Rehabilitation Centre https://www.simranshri.com/