SNAKES IN THE MEADOWS BY AYAZ KOHLI: A Saga of Kashmir 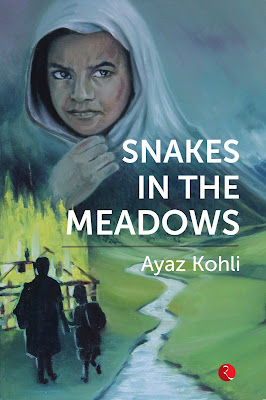 The biggest question any student of Indian writing in English might want to avoid is Kashmiri literature. There is a vast collection of folk tales and oral literature in Kashmir. There is poetry, songs, and novels too. However, A thoughtfully crafted serious fiction on Kashmir is rare. Snakes in the Meadows by Ayaz Kohli is a serious novel about the life in Kashmir valley. The story is settled in the background of the Pir Panjal region. A small village in the region named Pathri Aali is one of the characters of the story.

The novel opens with the life of Haji Mir, the patriarch in the village. Through Haji Mir we meet a world of characters with their own individual voices, ambitions, life, and preferences. It is a wonderful feat to assemble all these characters within the purview of a single novel. The story moves and turns like a river through the lives of these characters. One of the characters that impressed me was Aslam who ran away just before his marriage. His actions are not heroic. However, there is a hero in him.

Ayaz Kohli's writing is full of empathy and directness. He displays in front of us these many faces of characters, their lives, and their dreams. The reader can take sides if he or she wants. It is great fiction in action in Snakes in the Meadows.

Snakes in the Meadows is published by Rupa Publications, one of the finest publishers in India. The cover design is attractive. I liked it. I liked the fact that it is custom created. The cover looks like it designed with a few drawings. I have a special affinity for book covers that are either created from a drawing or are custom made designs or patterns.

It's available at affordable price. The typesetting is apt for a library space. The reading would be comfortable if you sit down in a suitable position with enough light on the pages.

The arch of the story in Snakes in the Meadows is a large one. However, the large story arch is broken into smaller units of micro tales that cover every small and big aspect of each character adds more depth to the novel. It's a commendable achievement to gracefully piece together these tales as part of a larger tale of sacrifice and betrayal. Militancy is one of the themes of the novel. However, Snakes in the Meadows is much more than a novel on terrorism. It tells the tale of human existence in its varying seriousness and depth.

The blurb of the book carries endorsements by Dr Shashi Tharoor, author and Kuldeep Khoda, Ex DGP, Jammu and Kashmir. Ayaz Kohli is a 2007 batch IAS officer. He currently serves as the Joint Commissioner- GST Mumbai. He was born and brought up in Poonch District of Jammu and Kashmir. He is the first person from the community and region to qualify for civil service. Snakes in the Meadows is inspired by his real-life experiences in Kashmir. Undeniably, Snakes in the Meadows is a remarkable debut novel and the birth of a promising writer.