THE DANCE OF DURGA by KANIKA DHILLON: A Review 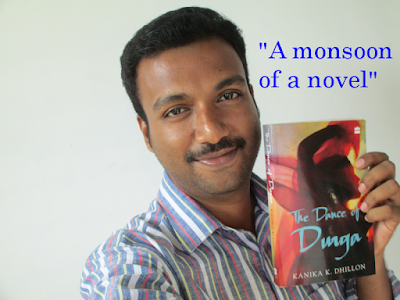 The Dance of Durga is a novel with its plot set in India. Its appeal, though, is universal. The present body of Indian English Literature is mostly set in urban centers. This trend has set in motion a new feel to the Indian English literature, a new set of vocabulary too. The Dance of Durga is different in that this novel overcomes the obsession of the writers in India writing in English to downplay Indian-ness for a sweeping monolithic urban aesthetics.

Kanika Dhillon has a voice that takes readers to the villages of Northern India, a voice that is captivating. Although the chapters in this book move chronologically, the story moves with seasons. The Commentator felt imbued with the spirit of the summer and the chill of monsoon through the pages of this book. The Commentator has recently been under a literary fervor to read and explore whatever that is ‘Indian’ that has appeared in stories over the years. And two writers have bonded with the Commentator: R K Narayan and Ruskin Bond. The bangor of life in a small town is RK Narayan’s canvas. Bond on the other hand dealt with nature. Kanika Dhillon, in The Dance of Durga paints the landscape of an individual’s journey.

The protagonist, Durga aka Rajjo, is not a usual heroine who is all good at heart. The Commentator observed streaks of grey in her persona. She is adamant in fulfilling her personal ambition. Her desire to replace Rani Maa, the godwoman is the driving force that transforms her life. However, the business of the godwoman is not all too spiritual. Observing Rajjo without her desire to achieve higher realms of power and possibilities would take us back to the village girl that she used to be. She suffered bitterly in love as a teenager. Although she is born with the gift of seeing future, she does not see the course her own life was about to take when she fell for Kashi.

After aborting the baby she was pregnant with in Kashi, her family marries her off to a wealthy old man. It’s imperative to question such a ridiculous system. This, though, is the Indian reality. Kanika K. Dhillon uses the machinations of realism in order to create the fantastic journey of Rajjo. The Commentator also noticed that the author used significant sensory details in this novel. As a reader, one could see, hear, and smell the background of the story. The innocence of childhood and village-life is followed by the thunderous catastrophe of Rajjo’s life with the abusive Sethji. The Dance of Durga is a monsoon of a novel.

The Commentator observes that the subjective space of Rajjo is saved by her own desire to be loved and fulfilled. Even in a predicament that could have pushed her life over the edge at Sethji’s house, she escaped due to her sheer will power. “Look for a desire and you will find your passion, your reason to be,” (100) she advises Raahat, the teenage boy she befriends at the Ashram, where she reaches after leaving Sethji’s house.

The Commentator believes that the novel projects the thought that if you have the desire, the passion for something in your life, you could survive irrespective of the number of odds you face. In the Ashram, Rajjo finds two of her passions: to become a powerful person, like the godwoman Rani Maa, herself and to find Harsh Vardhan who is married to another woman.

The novel has two parts named Rajjo and Durga respectively. The first part is Rajjo’s struggle for recognition, the fulfillment of her desire, and survival. The second part is her life as the powerful Durga. Kanika Dhillon has worked previously for movies such as Ra.One by Red Chillies Entertainment Company, and the South Indian movie Size Zero. “She has written the hugely successful TV show for Disney called Ishaan” [Wikipedia]. Kanika’s career started out as “an assistant director to Farah Khan, on Om Shanti Om, and then moved on to Red Chillies's Billu Barber, which was directed by Priyadarshan”[IMDb]. Her skill as a screen writer has been evident in the genuine dialogues that appear in The Dance of Durga. Kanika Dhillon is also the author of the bestseller Bombay Duck is a Fish (2011).

It is quite interesting to note that the reviewer attaches much significance to the physical milieu of the novel to contrast the text with the contemporary novels in India where much of the Indianness is constituted, as Anulal says, by an urban reality. Still fiction writers seem to remain within the domain of cityscapes. Kanika deserves a special focus in this regard. Sajan. SN College. Kannur. Kerala