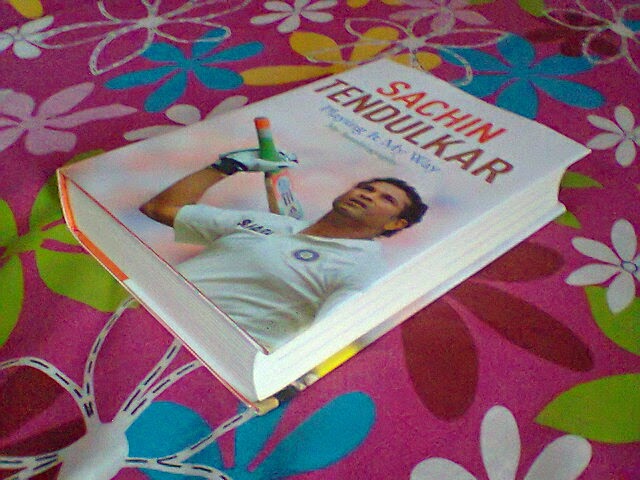 Playing It My Way is a book that insists on satisfying every bit of expectation the reader may possess regarding a book by Sachin Tendulkar, India’s cricketing legend. Playing It My Way has 28 chapters. The appendix that follows contains Sachin’s farewell speech with which he damped the eyes of millions of his fans after the final match of his career, on 16 November 2013 at the Wankhede Stadium. The publisher is Hodder and Stoughton and the revenue from the selling of the book (actually the author’s share) would go to two charitable causes: the alleviation of malnutrition in children and the provision of clean water to the underprivileged.

Playing It My Way has almost 500 pages and covers Sachin’s life from Childhood to his Final Test Match. What I found intriguing is that printed in this book at regular intervals is score cards from significant games Sachin was a part of or whenever the story of his life demanded the scorecard’s presence, which in Sachin’s life is quite often. If you are a cricket fan and a close follower of Sachin mania, you are also in for a treat, for towards the end of the book, you will find a Career Statistics of Sachin Tendulkar compiled by Benedict Bermange.

Playing It My Way is a book that every fan of Sachin would love and cherish. Reason? This volume contains not just scorecards and career statistics. It has pictures in it. In other words, Playing It My Way is not just a verbal treat on the unforgettable journey of Sachin Tendulkar, but also a visual treat. From family photos to pictures from memorable occasions in various turns of Sachin’s life are for up grabs. This makes Playing It My Way a souvenir for safekeeping for the generations to come.

Playing It My Way brought answers to several of the questions I had in my mind. When Sachin first played his international game, I was not in a position to even understand even the word cricket due to my young age. As I grew up though, Sachin Tendulkar became a household name, the name of a new ‘religion’ so to speak. Some say, Cricket is religion and Sachin it’s god. In India, with its dozens of religious faith and divine figures, perhaps, there was some reality in this popular saying.

As a young man, I observed that a sort of divinity was associated with Sachin in and out of the field of cricket. It wasn’t merely because he was a good player. Although I understand it now, back then I could not quite locate the reasons for venerating the player to the heights of the gods, during those early days. I was very young for such deeper thoughts to come my way. And I too was a fan of the great player. Still, my admiration of Sachin never crossed the boundary of sanity. I presume there were those in the early days who were ready to die for this man, as if he was really someone the heaven had sent.

Even before Playing It My Way was released, I was intent on my reviewing this book in the future. As Playing It My Way manifested in book form I realized that perhaps, there exists a chance to see through the veil of stardom, who Sachin really is by reading and analyzing the book. Is he a new god in the Indian pantheon? Or is he an ordinary middle-class boy from Mumbai who happened to have a lot of fortune on his side? But most of all, I wanted to identify the reasons for him staying for such a long period of time a person of immense importance in India.

As a player, Sachin had been reticent outside the field most of the time. He was never an active participant of the regular press banter. This led to a surprisingly narrow trail of written material by Sachin or with his stamp saying this is authentically me speaking. Playing It My Way is significant in many ways, but the way it offers Sachin’s story in Sachin’s own voice is unique of them all. Even before I got my hands on Playing It My Way I wished to see how the book opened. It was a mere curiosity.

Chapter One begins as follows: “Son, life is like a book.” What ends up being a narration of how his father advised Sachin Tendulkar on matters of life and cricket, is essentially what a psychoanalyst may call a Freudian slip. The subject of this first sentence and the main topic of the opening narration seem to amalgamate the core essence of Sachin, the man. Here lie the secrets behind his popularity and acceptance in India. Sachin is the good son, the ideal man, or the man with values. One of which the first sentence of Playing It My Way reveals—honoring father.

The values Sachin Tendulkar represented were evidently based on the Indian traditional grand narratives. The ‘son’ image in Ramayana, the epic written by Valmiki, in which Ram follows the promise his father had given one of his wives, even in a situation when his father, Dasharatha regretted each word of the vow he had made to Keikeyi. As a result, Rama had to spend fourteen years in forest, away from home. Thus the son honors his father. It may not sound unfamiliar for most world cultures to honor one’s father. Christianity is full of divine paternal images. And in that respect these cultures have striking similarities too. But the point is, in India, as seen in the Bible or in the Ramayana, prodigal sons do not earn much respect, neither from family nor from society.

Sachin had been immune to scandals and charges of match fixing that surrounded Indian cricket from late 90s. Often, he had been the one-man army to save Indian cricket team from devastating failures in international matches. One such event, I remember well. During the South Africa cricket match fixing, Sachin took upon himself the “burden” of taking the team to victory against great odds. 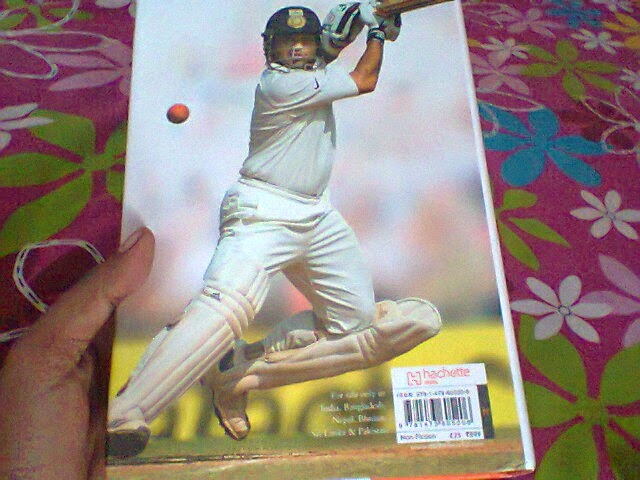 Playing It My Way is co-written with Boria Majumdar. Another aspect that renders Playing It My Way especially apt for showcases is its cover. The hardcover edition features Sachin with his bat raised, and looking upward toward heavens—a gesture that the fans of Indian cricket remember as the sign on thanksgiving by this legendary player, whenever he contributed toward a decisive victory. The back cover features no blurbs as is in the tradition of book publishing. Another photograph of Sachin playing his unique shot adorns the back cover of the book. Of course, the picture says it all. The price of the hardcover volume in India is just a hundred buck short of a thousand. Those who are considerate about money may find this another factor to find a space for this book in their showcase and not just in dusty old bookshelves.