"It is December, it is Christmas. Here is a Christmas gift for all my readers, a Christmas story. Happy reading."--Anu 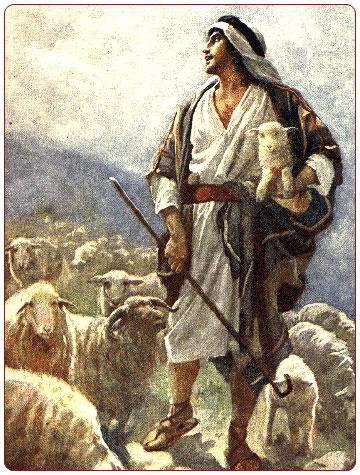 Once upon a time there lived a shepherd in a small village, where no one cared about shepherds. They were the poorest, the miserable, the illiterate and the hopeless. But Yaakov, the shepherd was different. He had a dream—a dream to meet angels. Like every one of us, he too didn’t know how and where the bud of this dream came to be rooted in his soul. And like every one of us, he too attempted to find out where and how, tried to recollect, this dream took its roots in his soul. Then he decided it might be far in his childhood. But that was just the way he explained it to his friends and fellow villagers. He was not at all sure. Perhaps, he had dreamed of angels when he was in his mother’s womb; a place where his memory failed to reach. Therefore, whatever he said was an imagination, something he attempted to justify himself for having dreamed such a terrible dream—to meet angels.
He woke up every day, thinking about his dream, his only hope in life and that gave him the enthusiasm to move on with the destitution. Every night, before closing his eyes, which he sometimes did in meadows distant from his village, grazing the sheep, he would think of the dream. And that never let the fear of loneliness or being attacked by the wild animals wander near him.
His friends and other villagers heard Yaakov speaking about the dream all the time. And as none of us now believe Yaakov’s dream may come true, his friends and villagers too did not. As a result, most of his friends kept a distance from him. But he accepted his destiny as a true shepherd does. He knew that every one will look up to him, care him, and respect him, after realizing his dream. His fellow villagers and neighbours too were embarrassed from Yaakov’s ‘madness’. For, them angels appearing to a shepherd was an absurd thought. One day, the village elders summoned Yaakov to the village court, which was a small assemblage under a tree.
There were only a few people there; some of the elders, Yaakov and his friends. No one else, probably, was interested in a shepherd’s case. The hearing began. Yaakov stood silent, as a shepherd was supposed to behave in front of the court. He had a lot of things to share, may be his imagination, but things that were required, he thought, to keep him away from being chained and dragged and closed in a room, and being titled as a mad man. But he stood patient, saying nothing. The hearing ended. The blames were proved. “You are blasphemous; a braggart who used angels to prove worthy of yourself,” one of the village elders said. He continued: “You are a culprit. And you should be punished. But considering your obedience to the court of the village, you are given an opportunity.”


Yaakov, who was calm, savouring his dreams in his mind as it was the only comfort he had in moments of despair, now brought back into the reality. He looked at the village elder, bewildered.
“We give you the time of ten days. Meet angels, or meet your destiny, a destiny that we decided—you should turn half the number of your sheep to the village court. And a failure in your commitment will prove to be your deportation outside the village, into the wilderness, forever.”—The village elder’s voice echoed in Yaakov’s ears. His friends cried and pleaded to the village elders, knowing well that their friend’s dream in nothing but a fiction.
Days passed by. Yaakov lived a normal life until the ninth day, because his dream demanded nothing else from him other than faith in it. He had enough faith and patience too. But Yaakov realized that the ninth day too was slipping away silently, witnessing no miracles, no angels.
And then the tenth day came. On that day, Yaakov and friends took their sheep to a meadow away from the village, so that they could think through the situation and help Yaakov find some way out from the predicament of the village elders’ punishment.


Day light drifted away and Yaakov’s friends were sure he was going to lose his sheep. They sat around in a circle by night and Yaakov’s friends discussed their different suggestions. But all this time Yaakov was silent, meditating behind his open eyelids the dream he savoured throughout his life. They all fell asleep by the midnight. Yaakov did not know how long it took after he fell asleep when he heard a voice. It was a call. “Wake up.” He woke up. When he woke up, the shepherd could not trust his eyes. He shook his friends up. They all screamed seeing the sight, when they woke up.
There was a bright light, a luminous body standing in front of them. That was an angel. They looked around in confusion, mistaking he scene from a dream they were having. There were stars in the sky and it was night, still, but miraculously, every thing around them was bright with a light that neither gave out heat nor showed its path, where it was coming from. It was a glorious scene.
The angel spoke:  “Do not be afraid. I bring you good news that will cause great joy for all the people. 11 Today in the town of a Savior has been born to you; he is the Messiah, the Lord. 12 This will be a sign to you: You will find a baby wrapped in cloths and lying in a manger.”
13 Suddenly a great company of the heavenly host appeared with the angel, praising God and saying,
14 “Glory to God in the highest heaven,
and on earth peace to those on whom his favor rests.”
It was written.
Yaakov’s eyes flooded up. His friends sat numb, bewildered, seeing their friend’s dream being fulfilled, directly with their own eyes.
That night changed not just their lives, but the life of the whole humanity. It became history. A shepherd trusted in his dream, and his friends loved him and they shared a part of the history. For if they hadn’t brought him to that meadow, one could hardly say whether the same events would happen. No dream could be detached from fulfillment, unless you lack faith in it.
[Parts from the Bible: Luke 2:8-14 from the New International Version, 2010.]
- December 24, 2010

Anu, thank you for sharing this with us. Merry Christams and a very happy new year to you.

Anu, thank you for sharing this with us. Merry Christams and a very happy new year to you.

Merry Christmas and a Happy New Year to you too, Always Happy!
No dream could be detached from fulfillment, unless you lack faith in it.
Anu

Hey thnz 4 sharing this..
I don't know much about bible & the moral was great....'No dream could be detached from fulfillment, unless you lack faith in it'.
Hope you enjoyed Christmas..

Hi Neeha, I enjoyed Christmas in my own different way. This is a story that I wrote, but it has its one foot in the Bible. That is its significance. I am glad that you like this.
Merry Christmas and a very Happy New Year.
Lots of Love,
Anu