NARASIMHA BY KEVIN MISSAL: A Review 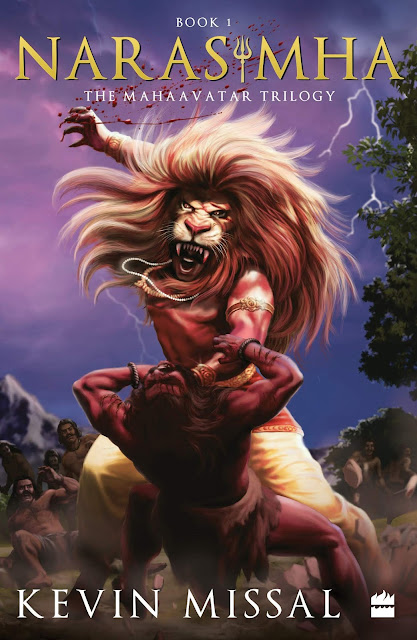 Narasimha is the first book in 'The Mahaavatar Trilogy' by Kevin Missal. This book comfortably bridges the subtle gap between mythology and fantasy. I could suggest this book to anyone with an interest in reading fantasies and a challenging retelling of mythologies. Narasimha satisfies you in both these areas.
Good fantasy writers are so rare in India. Rarer still are those writers who could help the reader forget about their realities, take them to a land of adventure, and thrill. Kevin Missal proves his mettle with Narasimha. In his "Note to the Reader" Kevin Missal gives a blueprint of his working strategy in creating the fantastical narrative. He uses elements from the great Indian epics such as Mahabharatha. His fictional world, which is the alternative version of the Vedic Age, according to the author, is called Illavarti. It's a place, which is rich in its possibilities.
Different clans, kingdoms, and groups rule Illavarti, where the reader may find a meaty source to satiate all their cravings for a rich fantasy. Kevin Missal's earlier trilogy, the Kalki trilogy is also rooted in Illavarti.
The protagonist is of this novel Narasimha, a physician, warrior, with a lion's hide on his body, donned as a symbol of authority. Prahlad, Hiranyakashyap, and Holika are the other major characters in the book. Chenchen, Anuhrad, and Andhaka are also eye-catching personalities in the book.
Kevin's language is lucid, coherent and helps the story move in a fast-paced manner. Taking into consideration the timeline of Illavarti, the story of Narasimha unfolds before the birth of Kalki. This would be a nugget of information for those who read Kalki books.
A quality effort has been put into the making of the cover of the book. It was Kevin Missal, who, for the first time in India, perhaps, understood the power of a great book cover. This is evidenced in his Kalki trilogy covers. An almost coming-book-graphic-novel-type covers grasp the readers' attention the first sight itself. Narasimha is also not different. The same cover designing team has worked on this book as well.
The typesetting of this book is typical Harper Collins work. It is easily readable with a flair that warms the eyes. For a long work like Narasimha, font size, alignment of fonts on paper, etc matter. All of these factors add to the creative extravaganza that Kevin Missal presents. This is a book for both libraries and bus stops. It's easily readable while moving in a vehicle.
The narrative strategy is full of action and adventure that combines its charm with some emotional moments that keep the reader attached to the main character. The Narasimha you find in Kevin Missal's novel may not be the same Narasimha that you find in Indian mythology. Narasimha, according to mythology is the fourth avatar of Vishnu, the Indian god of sustenance. In Kevin Missal's narration, an avatar is not someone who is born special, but someone who earns his status as an avatar by taking the right course of action, even if it brings him or her chaos. In this angle, the growth of the character Nara is commendably portrayed. Kevin Missal's novel adds a logical sensibility to a mythological narrative in a fantastical setting.
Dharmayodhya Kalki: Avatar of Vishnu, Satyayodha Kalki: Eye of Brahma, Mahayodha Kalki: The Sword of Siva are the books in the Kalki series.
- November 07, 2019